When Traveling You are Never Truly Alone

I constantly have people asking me questions about my solo traveling adventures. Am I scared? Can I find my way? Do I get lonely? While any of these can rear their ugly heads throughout our lifetime, being on the move and embracing the twists and turns of adventure actually keep them at bay. Which brings me to one of my favorite sayings:

When I start to feel the prickles of fear I know it is time to make like Nike and just DO something; dive in head first, start a conversation, switch up my strategy. Those of us who are citizens of developed countries seem especially prone to fear of embarrassment and isolation. But the reality is that we don’t need to feel lonely just because we are in a strange place. Unless you are traveling somewhere truly desolate (think Antarctica or the Australian Outback) company is not in short supply. We have reached a population of over 7 billion worldwide (that occurred in 2011 for those of you who missed the announcement) so a new person you’ve never met before isn’t far away.

So drop the cool act and join in on a conversation. Crack a corny joke and ask questions. You never know when a smile and and a “where are you from” will lead to a timeless friendship.

Recently I was on a bus from Cartagena to Santa Marta, Colombia when the last passenger on the bus and I struck up a conversation. Originally from Puerto Rico he studied and worked as an engineer before following his true passions of motivational speaking and writing. The two hour long bus ride flew by in such recharging presence and when we parted ways I had been gifted a signed copy of his book. Life is a very dynamic canvas with so much opportunity for growth and connection with those around us. So put down the video game, pull out your earbuds and go against the advice we were fed as children: DO talk to strangers. A kindred spirit may be just a conversation away. In the presence of such delightful strangers we are never truly alone. 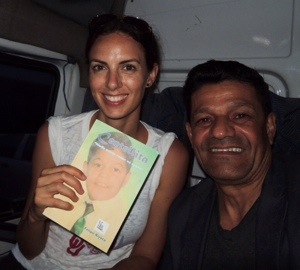 A new friend and a new book!