I touched down in Antananarivo (say that three times fast), the capital of Madagascar. Working in a “flying” position with NGO Action Against Hunger, I am poised to respond to any of the more than 40 countries they operate in to provide emergency nutrition survey support. Madagascar was next on the list, and I was thrilled for the opportunity to explore this fascinating African island nation. 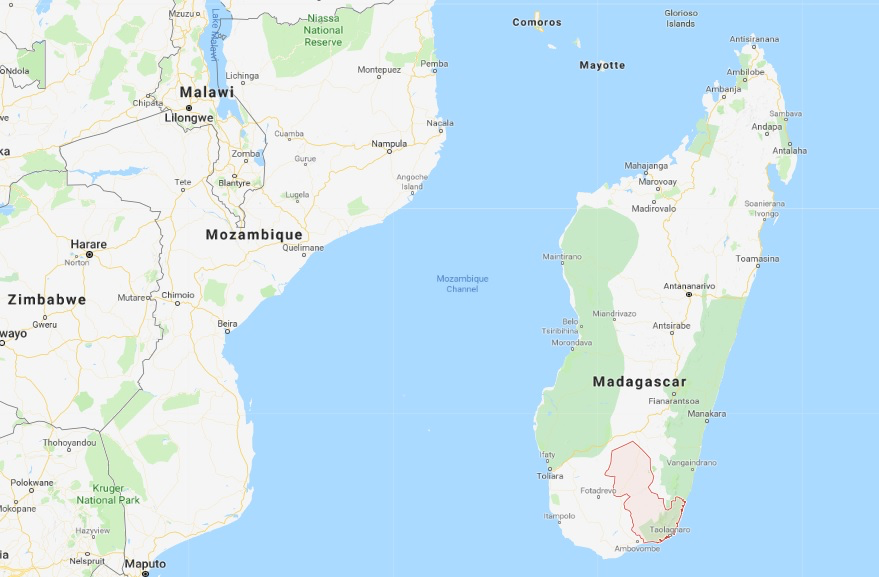 The Island Nation of Madagascar, off the Southeast Coast of Africa

(The Region of Anosy Where I Worked Outlined in Red)

Madagascar is the fourth-largest island in the world situated in the Indian Ocean off the southeast coast of Africa. It’s probably most famous for its lemurs (brought to life in the Dream Works film Madagascar) and the well-earned reputation for producing the highest quality vanilla beans in the world.

The people of Madagascar are referred to as “Malagasy” as is their primary official language. French is also an official language, however, due to the French invasion and colonization of Madagascar from 1883 until 1960. Malagasy origins are largely from people who sailed from what is now Indonesia and Bantu people who sailed from the African mainland. There are also subtle Arabic influences. The result is a land where Africa meets Asia in the language, cultural practices, and the blended features of the people.

In preparing for two months in Madagascar, I had two main concerns. First was the incidence of plague that had popped up throughout the country. Yes, you read that right–good old, Europe decimating, bubonic plague. To make matters worse, in Madagascar a fun strain had popped up that caused lesions not only on the skin but also within the lungs of victims. Yikes! Happily, the plague was mostly under control by the time I arrived in the country. My second concern was how I was possibly going to pronounce the names of my survey team members as Madagascar is infamous for incredibly long names. This is in part because traditionally in Malagasy culture there was no differentiation between first names and family names; a person’s name was an amalgamation of several names.

The current president is Hery Rajaonarimampianina

Madagascar’s most famous king was Andrianampoinimerina

Madagascar’s most infamous queen was Ranavalona I (born Rabodoandrianampoinimerina)

To my relief, I quickly realized that almost everyone has a short nickname, and the Capital (Antananarivo) is forgivingly referred to as just “Tana”.

When I first imagined traveling to Madagascar I pictured dense tropical forest and playful lemurs. After all, Madagascar is incredibly biodiverse. Today, 90% of its estimated 700 species of reptiles and amphibians are found nowhere else in the world, and 600 new species of plants and animals have been discovered there in the past decade alone. Its geography and ecology are so distinct from the rest of the world that it is sometimes referred to as the Eighth Continent. Instead of exploring any sort of jungle milieu, I was sent to the arid “wild wild west” (south) where cacti and cattle hustlers abound. I felt like I was in the southwestern United States at some moments. Cue tumbleweed and cowboys. 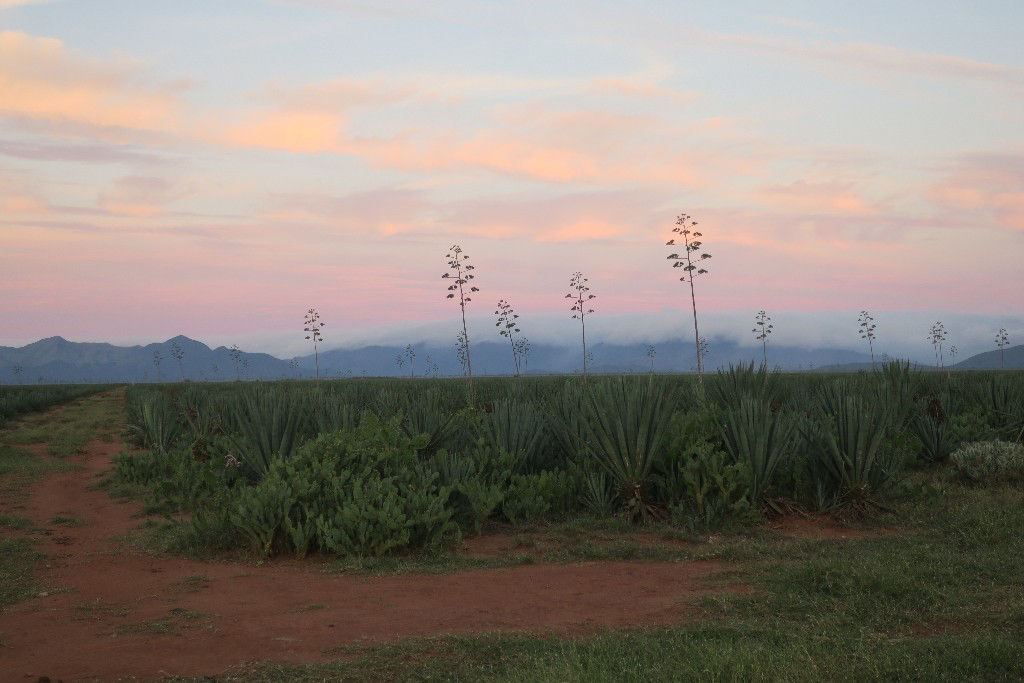 The Sun Sets in Southern Madagascar

I quickly adapted to our daily routine at the base where I lived with two other international colleagues (one from the DRC, one from Niger) and worked alongside our national Malagasy staff. In the morning the friendly Malagasy greeting of “salama” dripping off people’s lips like honey. By midday, in defiance of the baking sun, forceful winds would whip across the expanse, slamming shutters and doors closed if they were not properly secured. Walking through the town’s dusty central road to the market in the evening was a social affair; with everyone young and old sauntering through the streets, exchanging greetings and local events. 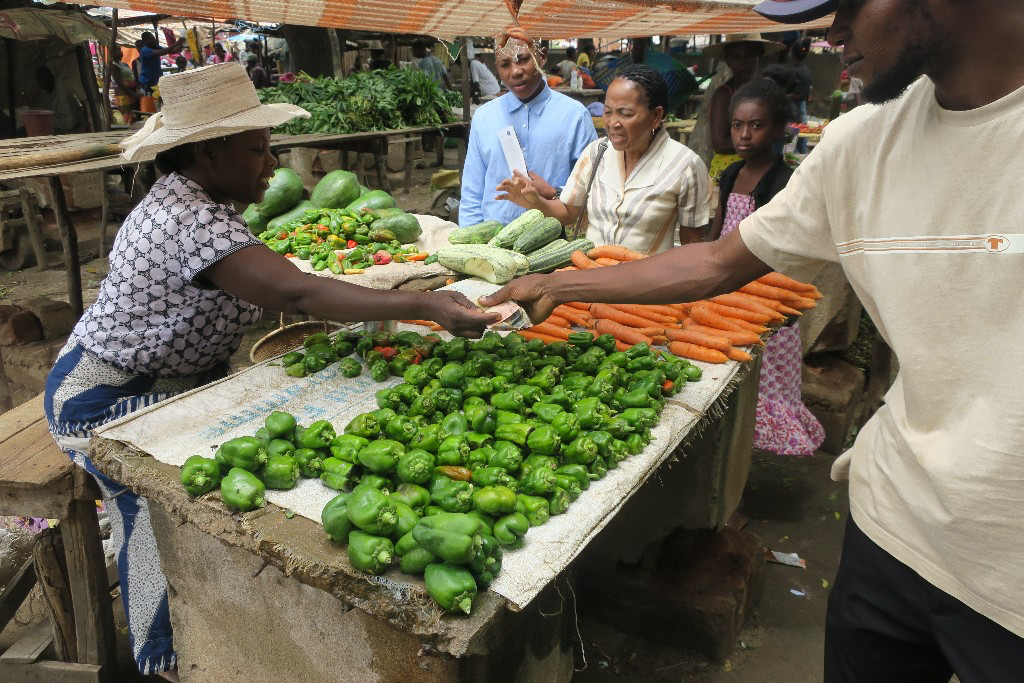 Grocery Shopping at the Market with my Housemate 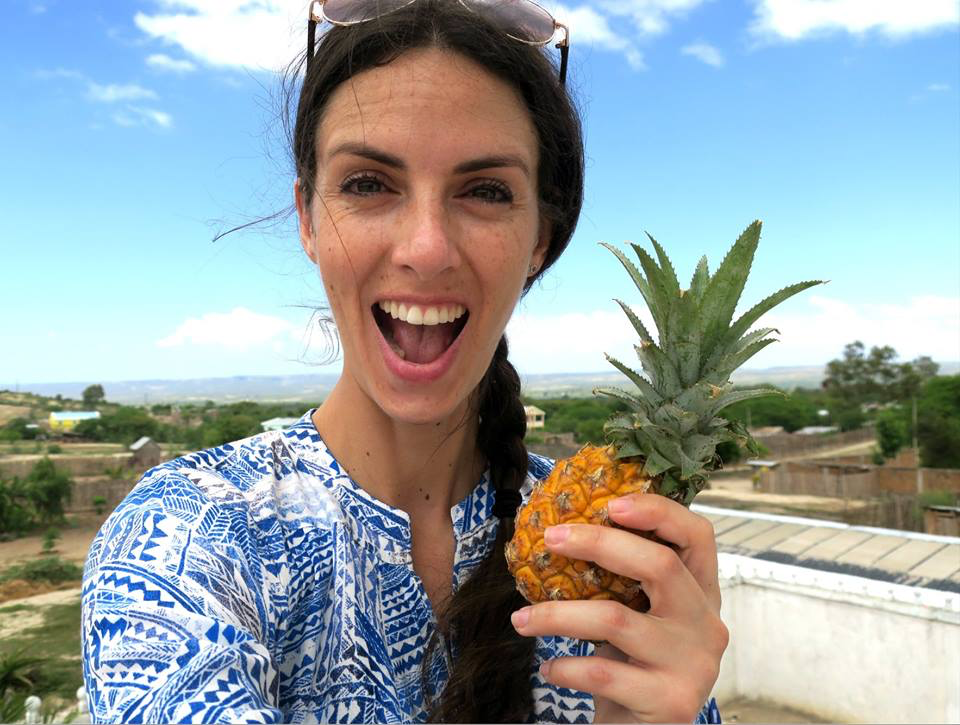 I Found the Cutest Pineapple Ever!

You might wonder why I was in the South of Madagascar to conduct a nutrition survey in the first place. Surprisingly, my work had nothing to do with the effects of the plague outbreak, but everything to do with El Niño. Despite Madagascar being exceedingly rich in biodiversity, coffee, vanilla, minerals, and gemstones, the nation’s people are incredibly poor, with 76.2% of its population falling below the World Bank cut-off of extreme poverty.  That means less than $1.90 per person per day in terms of purchasing power parity [PPP]. Most of the population relies on subsistence farming, an especially tenuous livelihood in the dry south. A several-year drought was made even worse by an El Niño weather pattern in 2016, which caused the UN to warn that the people of Southern Madagascar were on the brink of famine.

Action Against Hunger was one of the main organizations to respond to the crisis in 2016. I had arrived to conduct a follow-up nutrition assessment, to see if the measures to treat and prevent acute malnutrition had been successful. Spoiler alert: we found humanitarian efforts may have had a stabilizing effect, but there were no significant improvements in children under 5 years of age between 2017 and 2018.

After completion of survey planning, recruiting my teams, and a five-day training, we were almost ready for the real work to begin: data collection. We were operating as four teams of three people plus two supervisors for technical support. Data collection promised to be challenging, with deteriorating roads, extreme heat, and the threat of insecurity caused by the ill-famed dahalo (cattle thieves). 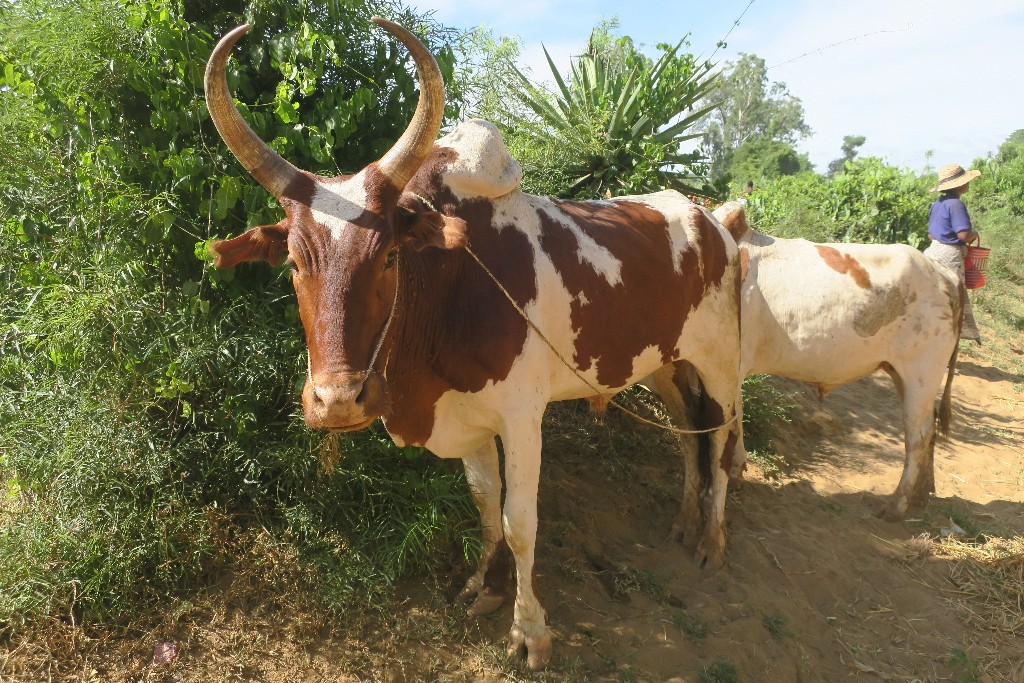 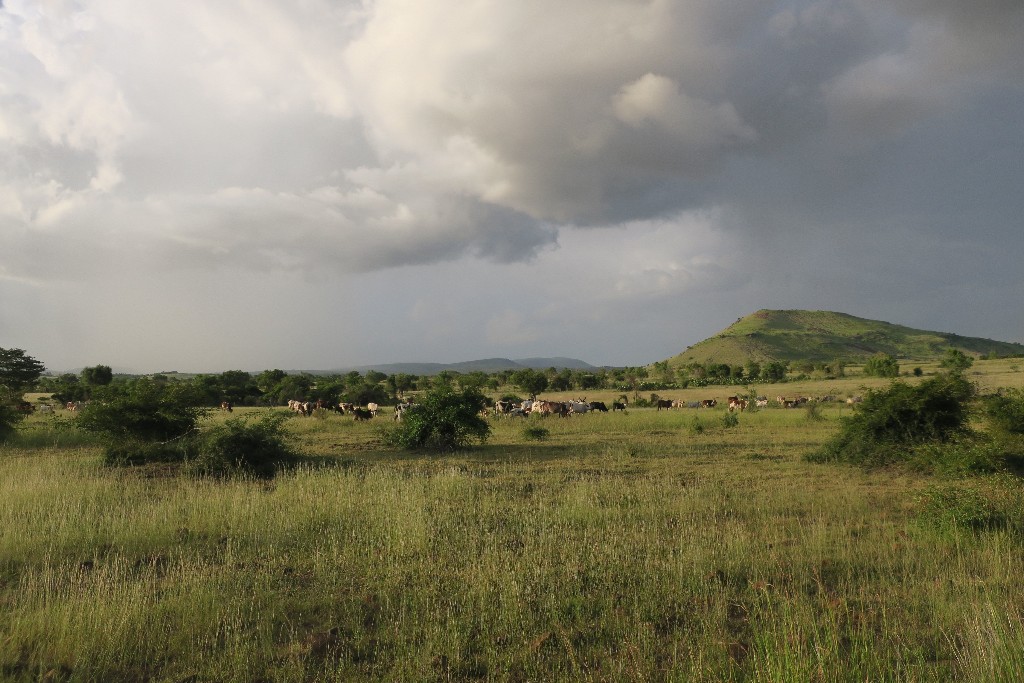 In order to understand how cattle thieves can actually be a very big deal (I did not understand the gravity upon arrival), it takes an understanding of the importance of cattle in Malagasy culture. In Madagascar, the zebu—a large hump-backed breed of cattle—is incredibly important for status and financial security. Especially in the underdeveloped south, these animals serve as a family’s bank account and financial investments. For certain ethnic groups in Madagascar, zebus are critical to their culture and livelihoods, particularly for the Antandroy and Antanosy. Zebus may act as a wedding gift, payment for a dowry, the repayment of a debt or theft, and are particularly important for a funeral. At an Antandroy funeral, his family and guests will eat all of his cattle, and his tomb decorated with the zebu skulls as an indication of his wealth. At the funeral, they may also burn his house to the ground to guard against hauntings. Malagasy culture is a complicated tapestry of gestures of respect and fady (taboo behaviors). Here is an interesting list of cultural practices and fady compiled by a Peace Corps volunteer. The theft of zebus, which once acted as a rite of passage for young men, has evolved into organized crime. I heard stories of AK-47 armed dahalos attacking and killing whole families and razing entire villages. Despite a government crackdown killing more than 400 dahalos in 2014, the threat of violence remained. 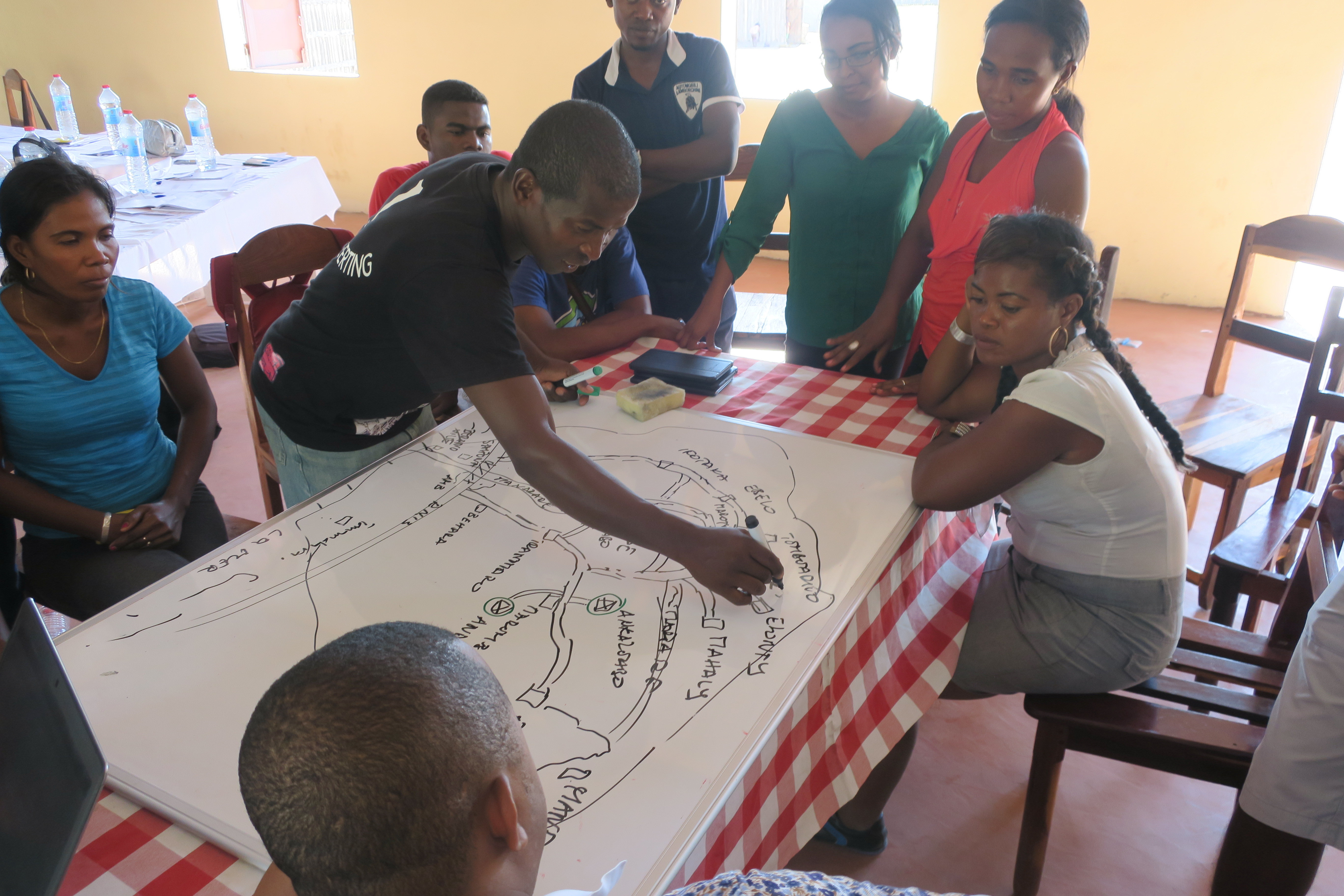 Most Efficiently and Safely

We stocked our vehicles with bottled water, staple food items, all necessary data collection materials, and set off to survey our 37 randomly selected villages. In order to properly conduct this type of survey you need to randomly select a village from a complete list of villages for the area. Once you select your villages, you are required to go there. I was so thankful for the high energy and dedication of my survey team members. We were in for a wild ride. 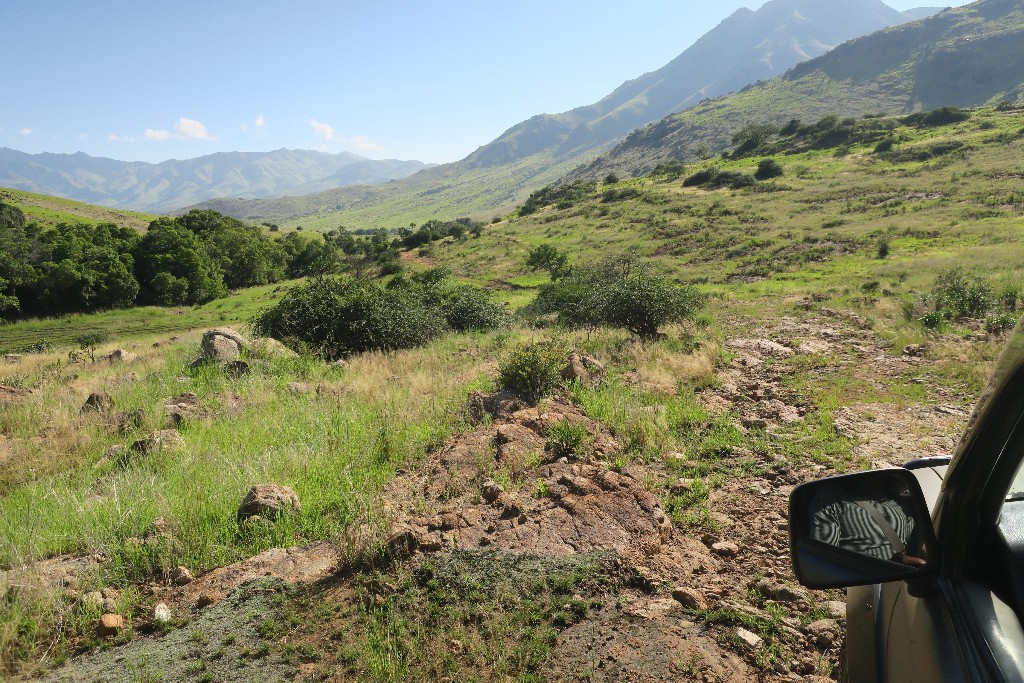 Sometimes the Roads Were More Fit for Goats than Vehicles

Nutrition surveys rely heavily on your team’s ability to make introductions: to local officials, to village chiefs, to village residents, and to the households you are going to survey. My teams were absolute pros by the end of our journey. 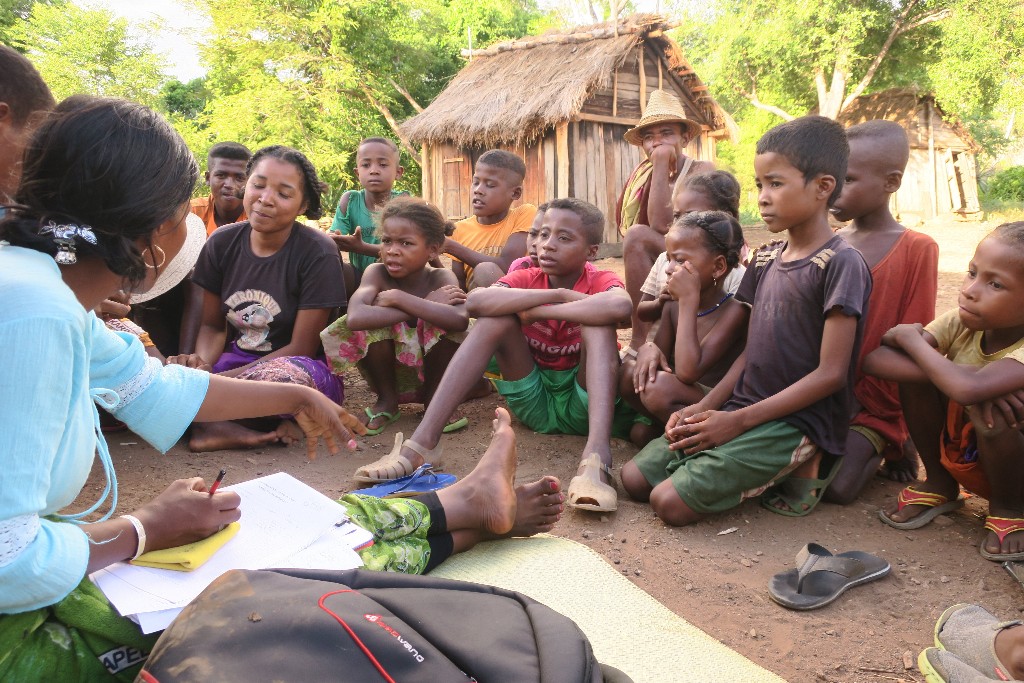 A Team Explaining Our Survey Objectives to a Village

Another necessity for success was the hiring of a local guide in each village to navigate and facilitate these introductions. Generally, our local guides were village chiefs or spry young men who knew everyone. In one village, however, a grandmother with a twinkle in her eye acted as our guide throughout the long hot day. She was a bundle of wisdom and curiosity, with more endurance than all of us, and my favorite guide so far. 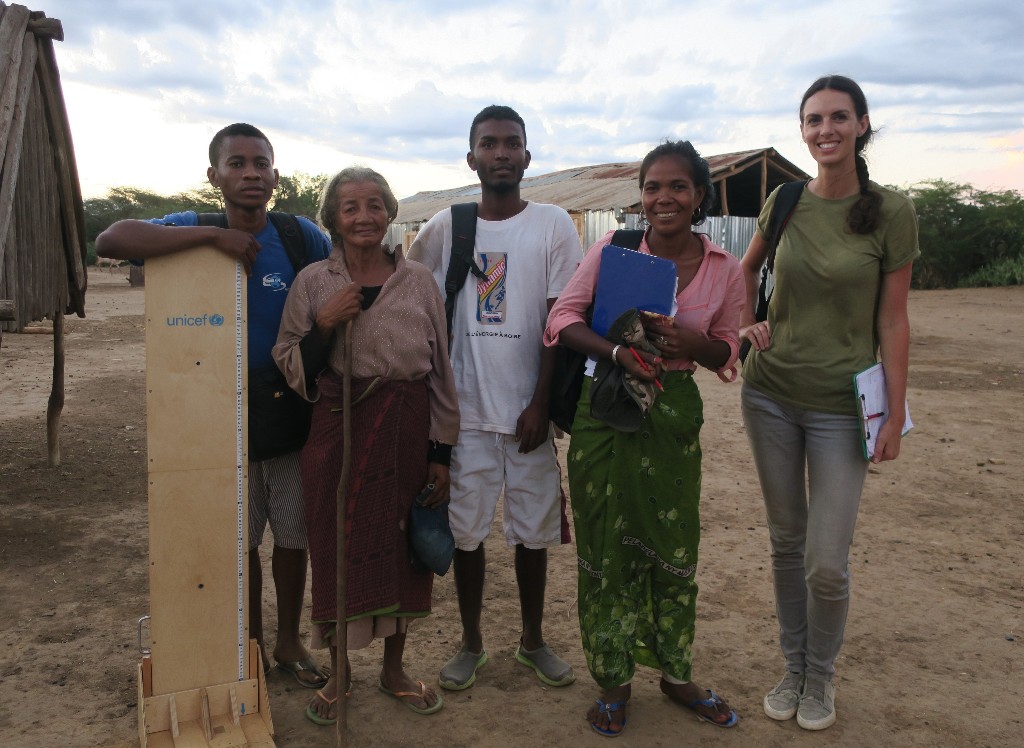 A Team and My Favorite Guide of All Time

(The One with the Walking Stick) 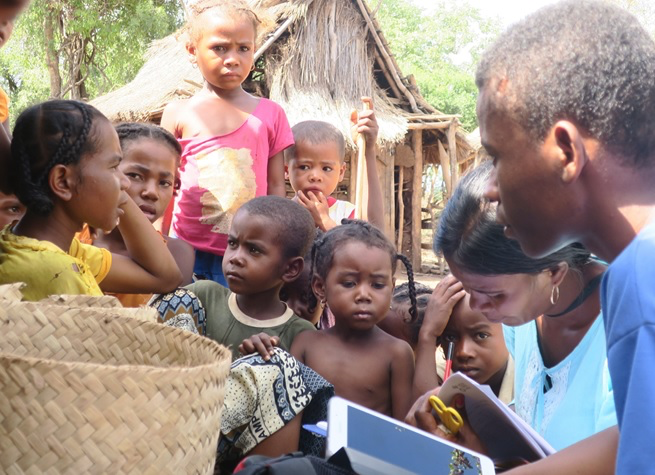 A Team Interviewing a Household

(How Many Children Can You Count in this Photo?)

Although for two nights we stayed in simple hotels during data collection, much of the time we relied on the kindness of strangers. The process went something like this: arrive in a village, ask if there was a space we could rent for the night, and appreciate whatever was offered to us, sometimes a bed, sometimes a concrete shop floor with a straw mat laid over it. We stayed together and always found a way.

Knowing that water scarcity is a severe problem in this region, we brought bottled water for drinking. Water for bathing was less available, so our options were bathing in the local rivers or using a bucket of precious water in a rare outdoor shower stall. We stocked up on basics like rice, lentils, pasta, and vegetables to cook over a fire for lunch or dinner. My teams bought meat in the villages. Our breakfast routine in the more populated areas, however, was my favorite. We would find a little roadside café and feast on mokary (small grilled cakes made from a slightly fermented rice batter) and sip on tea or coffee. I can’t wait to try my hand at making them the next chance I get! 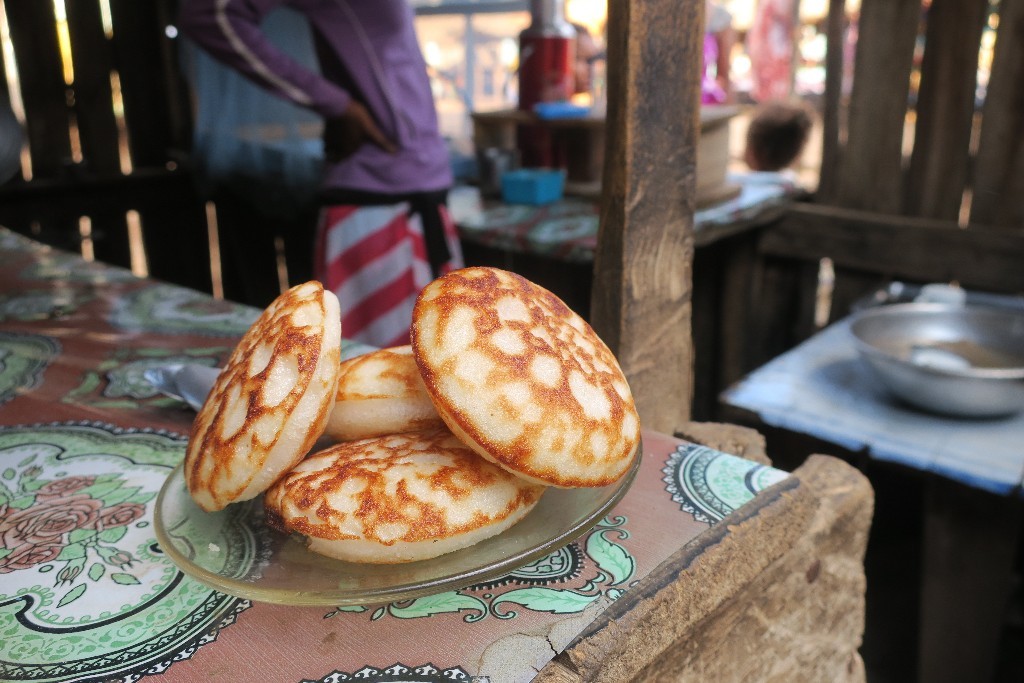 A Mouthwatering Plate of Mokary

Ultimately, our survey was a success, and I was endlessly pleased with how my teams worked together to make it happen. They showed immense focus and commitment to our data collection goals—so much so that one team almost waded across crocodile-infested waters to reach a village! (Thankfully, the team leader made the right call to reroute). The places we ventured were sometimes so remote that I couldn’t imagine many outsiders had ever seen them. Some settings so gorgeous it didn’t feel real; as if I’d been cut and pasted into a magnificent painting. 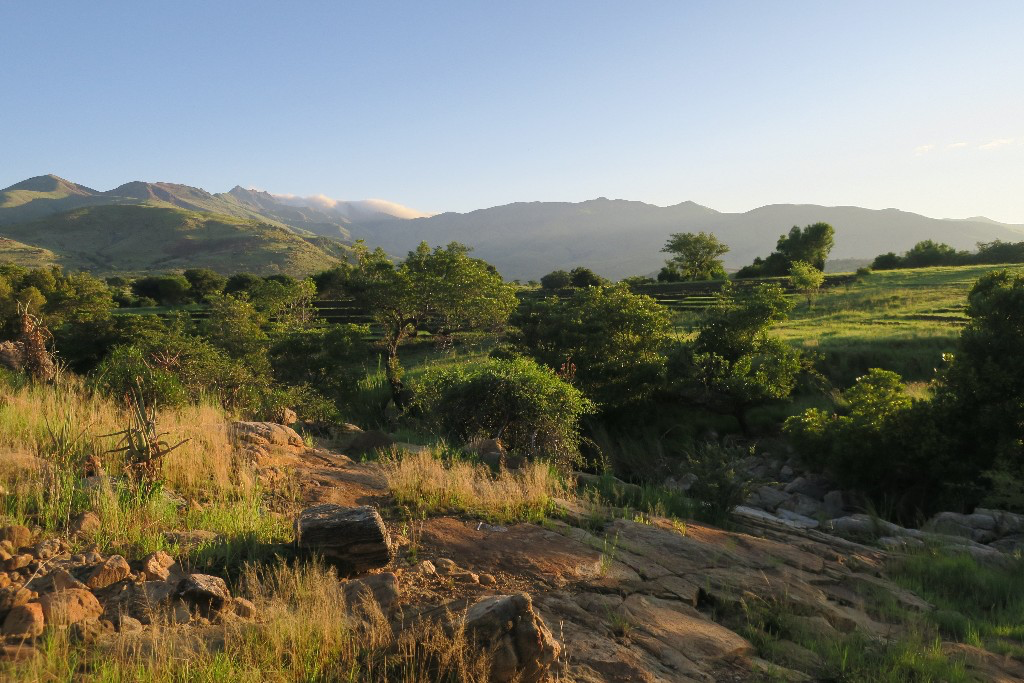 So Beautiful I Felt Like I was Photoshopped In

Our survey complete, there remained one thing left on my list before I could leave the country. I needed to see real live lemurs! These unique creatures are endemic to Madagascar, where there are about 100 species of them; from the Indri Lemur which can stand nearly four feet tall to the 1.1 oz Madame Berthe’s Mouse Lemur, which is thought to be the smallest primate in the world. Perhaps the most famous, however, is the ring-tailed lemur. These were what some colleagues and I set out to find at the Berenty Wildlife Reserve. We arrived in the heat of the day, worried the lemurs would be sleeping and out of sight, but they did not disappoint. We saw several groups of them, swinging between limbs, a few babies clinging to their moms, making the funniest pig-like grunting noises I’ve ever heard. 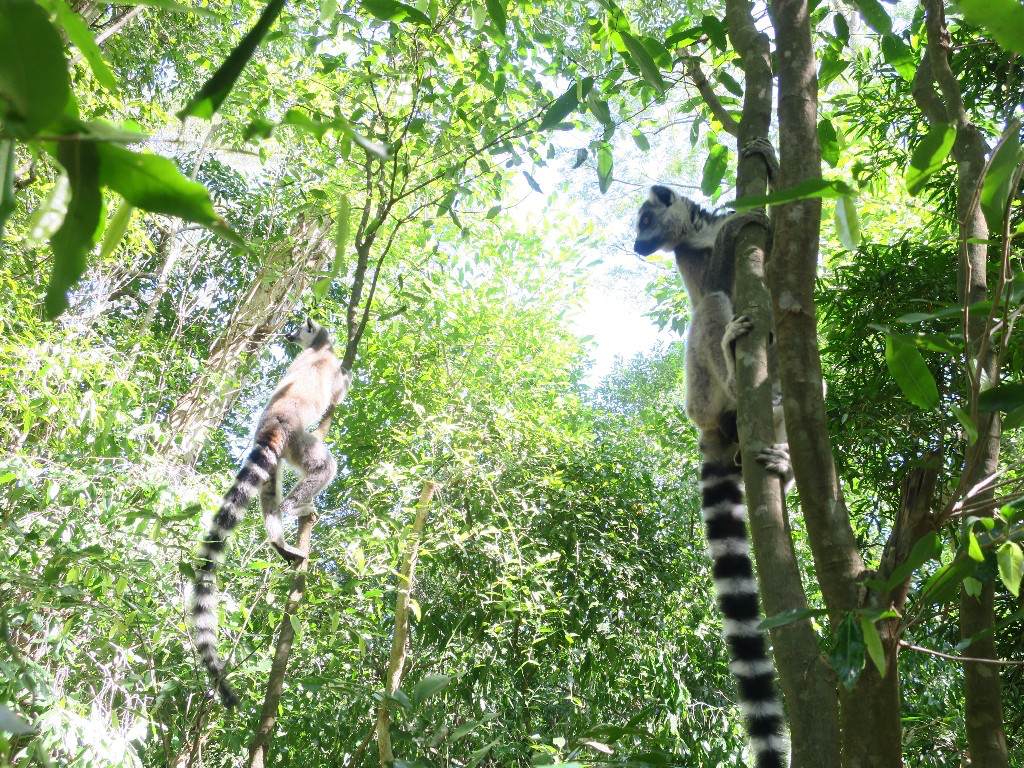 Take Me to Your Lemurs

With my Madagascar mission complete I was headed back to Portugal for a bit of home-based work, and some time to explore my new home and country of residence.