Alexa Travels > The Journey > Humanitarian Musings > What Would Equitable Refugee Resettlement Look Like?

The terms “refugee” and “immigrant” flood the headlines in today’s political climate; sometimes out of genuine concern, sometimes out of fear, and sometimes as a means for political ends. Currently more than 65 million people—one in every 113th person on the planet—have been displaced from their homes by conflict or persecution. In other words, a population size equivalent to the UK. Forced displacement has increased since the mid-1990s and the rate has increased drastically over the past five years. The reasons are largely threefold. First, we’re seeing the increased duration of conflict compared to historic trends. Second, an increased frequency of new or reignited conflict and violence. Third, the solutions for mitigating the dangers to and facilitating resettlement for IDPs and refugees has been on a downward trend since the end of the Cold War. The result of these and other aggravating factors (such as climate change and global wealth accumulation) contribute to today’s global crisis—where more people are displaced globally than ever before. 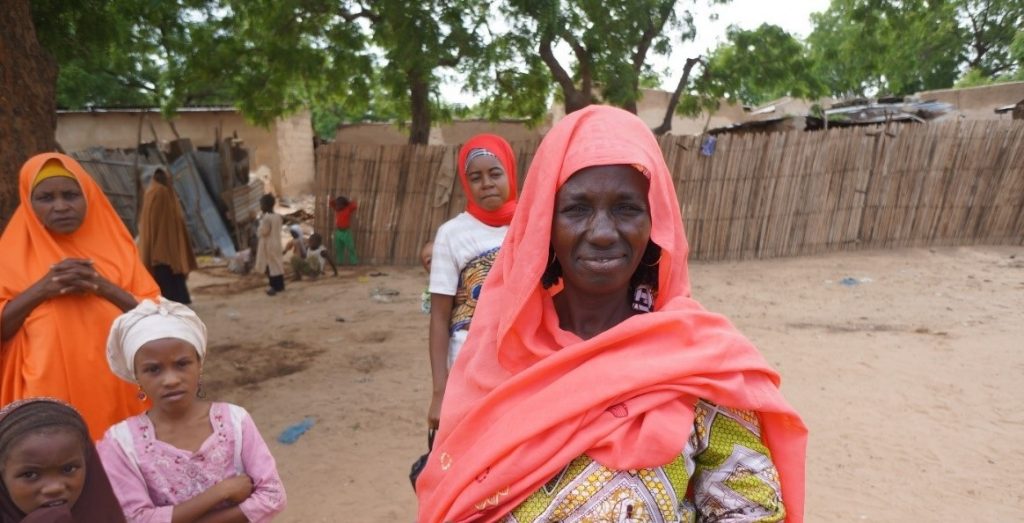 Faces of Resiliency in a Displaced Population in Northern Nigeria

According to the 2015 UNHCR report Global Trends; Forced Displacement in 2015, more than 65.3 million people around the globe have been forcibly displaced; of which nearly 21.3 million are refugees. The analysis included in this article will focus solely on refugees, which are defined by the 1951 Refugee Convention a refugee is “someone who is unable or unwilling to return to their country of origin owing to a well-founded fear of being persecuted for reasons of race, religion, nationality, membership of a particular social group, or political opinion.” The analysis in this article does not include asylum-seekers; those who have fled their homelands and await the arduous legal process of official recognition as refugees. (This can easily translate to several years in limbo. In the EU processing times range from 6 months to 3 years. The United States Department of State currently estimates a waiting time of 18 to 24 months.) This article also does not examine the figures for internally displaced persons (IDPs) who have fled their homes without crossing an international border, stateless persons, or other migrants.

Of the 21.3 million refugees documented in 2015, 65% of them fled from just four countries: 1.1 million (5%) from Somalia—arguably the world’s most infamous failed-state, 2.7 million (12%) from Afghanistan due to decades of invasion and recurring conflict, 4.9 million (23%) from Syria due to the ongoing complex emergency and proxy-war, and a whopping 5.2 million (25%) from Palestine—unsurprising considering that the Palestinian-Israeli conflict is the longest ongoing refugee crisis today FIGURE 1. The next six nations of origin in decreasing magnitude are South Sudan, Sudan, the Democratic Republic of the Congo, the Central African Republic, Myanmar, and Eritrea. The conflict in Syria has received particularly significant worldwide attention because of its large refugee flows to Europe over the past six years. Receiving far less international attention, those fleeing war torn Yemen have increased rapidly but are not well captured in this data. 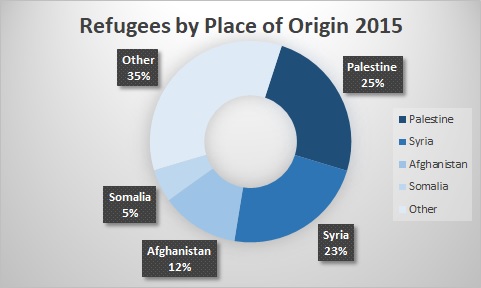 In terms of refugee hosts, the three countries hosting the largest numbers of refugees are Jordan (2.8 million), Turkey (2.5 million), and Palestine (2.1 million). Jordan and Turkey due to large migration flows from neighboring Syria. Palestine due to Palestinians being expelled from or fleeing newly formed Israel (the Palestinian refugee population is the largest refugee population in the world to have multi-generational refugee status). It is evident from FIGURE 2 that the top then refugee host nations are all developing countries. This imbalance was challenged by Winnie Byanyima, executive director of Oxfam, at the September 2016 UN Summit in New York when she declared that “the world’s six richest countries, which make up more than half of the global economy, host less than nine percent of the world’s refugees and asylum seekers.” This inequitable hosting of refugees impacts low- and middle-income countries hardest, as their economy, population size, and level of development pose challenges to meeting the additional humanitarian demands of assisting newly displaced populations. According to a 2016 report by Oxfam, “The responsibility for providing [for] refugees […] is falling disproportionately on poorer countries, which are often struggling to meet the needs of their own people or are at risk of compromising their own stability.” In addition, refugees hosted by developing nations are more likely to be shuttled into camps given the lack of infrastructure, instead of being resettled into preexisting communities by renting rooms or apartments (Canada has a particularly successful and inclusive refugee resettlement model, based on integration into preexisting communities). If the history of humanitarian aid has taught us anything, it’s that refugee camps are a band-aid, not a solution. Crowded and lacking infrastructure refugee camps are often unhygienic, running the risk of spreading infectious diseases such as measles, cholera, and meningitis. They are often situated far from roads, hospitals, schools, and markets—essential features of a thriving community. Although we acknowledge that refugee camps are for emergency interventions, the average lifespan of a refugee camp is close to 7 years. Meanwhile, Kenya’s sprawling Dadaab refugee camps have been around since the early 1990s. 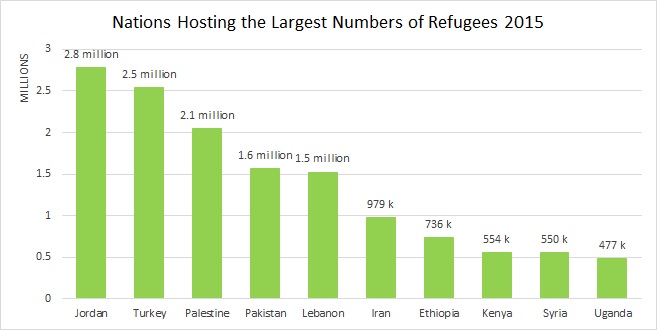 “The world’s six richest countries, which make up more than half of the global economy, host less than nine percent of the world’s refugees and asylum seekers.” – Winnie Byanyima, Oxfam Executive Director

The World Humanitarian Summit (WHS) held in Istanbul in May of 2016 was the first summit of its kind and an unprecedented opportunity for the humanitarian community to collaborate on the problem of global displacement. One of the five core responsibilities addressed was the responsibility to “Leave No One Behind” in which the UN Secretary-General Ban Ki-Moon challenged the humanitarian community to develop a new cooperative framework for a predictable and equitable response to refugee movements. This was an important wake-up call, specifically for developed countries hosting small numbers of refugees relative to poorer nations. This reality was brought firmly to the table at the WHS by Turkish President Erdogan in his insistence that “we have not been able to receive the necessary support and contribution from the international community on the refugee crisis, and we now expect a fairer sharing of the burden.” At a time when more people are displaced around the globe than ever before, the international community can no longer ignore the displaced elephant in the room. Actionable steps for sharing the responsibilities of displacement are urgently needed.

Let us embark on a thought experiment. Let’s imagine for a moment the majority of the worlds’ leaders and citizens agreed to setting goals for equitable refugee resettlement. How does one begin to approach the current refugee crisis equitably? How is this defined? How can this be achieved practically? In its simplest form, the term “equitable” is defined as exhibiting fair and equal treatment to all concerned. Using the term equitable implies a system that refrains from bias in determining how refugees are resettled regardless of their country of origin. The term equitable also acknowledges that nations differ in their capacity to support an augmented population.

Scholars and advocates alike agree that a more equitable distribution of the responsibility of nations to host refugees is necessary. As argued by Penelope Mathew and Tristan Harley, in their book Refugees, Regionalism and Responsibility, the physical distribution of refugees should be determined by the capacity of a state to absorb and protect refugees. This logic is sound, but there isn’t agreement on how to quantify the capacity of a nation to host refugees. There are arguments to be made for considering a nation’s population size, population density, and level of development as indicators. With further research, an index of several indicators may ultimately be the best measure of capacity. At this point in time the most frequently cited metric for comparing the capacity of different nations to provide for an expanding population is by its Gross Domestic Product (GDP). The UNHCR regularly evaluates a nation’s contributions to refugee protection by comparing the size of the hosted refugee population with the host nation’s GDP Purchasing Power Parity (PPP). The GDP alone is not sufficient as currency rates fluxuate, thus the GDP (PPP) is used as it corrects for an exchange-rate-adjusted unit of currency, which allows for greater international comparability. For the analysis portion of this article, a nation’s GDP (PPP) as a percentage of global Gross World Product (GWP) is used to look at the current distribution of refugee resettlement versus in an equitable scenario.

How Do Countries Measure Up?

Figure 3. Current Number of Refugees Hosted Versus an Equitable Scenario 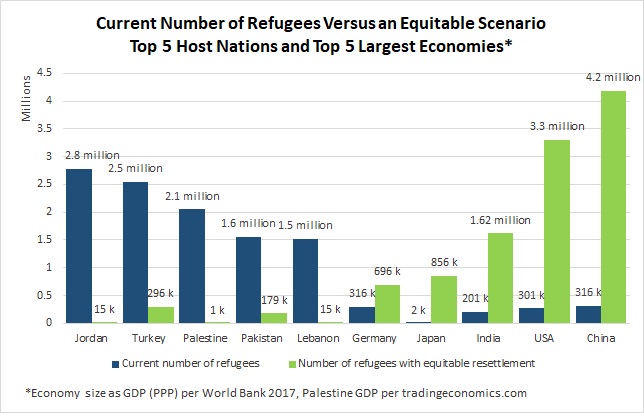 This article has sought to conduct a thought experiment on equitable refugee resettlement. This has been predicated on the juxtaposition of two scenarios, the current distribution of refugees and the distribution of refugees in a scenario of equitable resettlement—in order to highlight discrepancies. The scope of this article is, however, limited by its lack of ability to address specific criteria for resettlement. Questions surrounding how and where refugees will be resettled, the importance of factors such as language, religion, climate, and culture in resettlement, and the prioritization based on family ties overseas are not explored although they are deserving of greater discussion.

The need for a conversation around the equitable resettlement of refugees is urged by the current and increasing crisis of displacement occurring globally. Since the 2015 data this analysis is based upon, the numbers of refugees have continued to climb throughout 2016 and 2017. Strikingly, this year Syria becomes the only country with the unfortunate distinction of having the majority of its citizens displaced, as more than 12 million have fled their homes. This conversation is also necessary because there is little evidence this trend will ebb. With climate change at our doorstep, research linking climate change and conflict is even more disconcerting. The Berkeley meta-analysis by Solomon Hsiang and Marshall Burke Quantifying the Influence of Climate on Human Conflict concluded that for each 1 standard deviation increase in global temperature, the frequency of interpersonal violence increases by 4% and intergroup conflict increases by 14%. Meanwhile, some nations have begun relocating island populations in response to rising sea levels. Although forced displacement has been on an upward trend since the mid-1990s, the mechanisms put in place to meet the needs of displaced populations has been on a downward trend. Perhaps it’s time to shift the paradigm from hoping wealthy nations will offer to resettle refugees to setting specific, measurable, and equitable goals for refugee resettlement. Based on recent trends and future projections, mechanisms for the equitable and legal resettlement of refugees will only become more necessary in the future. In an era of increasing displacement, it’s time for the Global North to step up.