Surprises in a Congolese Hospital

For those of you who were wondering, I made it to the Congo.

First things first, in order to work in the DRC as a non-national a full medical examination is required. So off to the recommended hospital I went. “It’s not that bad” my colleague told me “just make sure to take something to read!” I braced myself for the worst. I’ve had some harrowing hospital experiences in developing countries (to be fair I’ve had some delightful moments as well) but I was very surprised by what I found. The hospital looked newly constructed, the wing I was ushered to could be called “grungy chic”, and the woman at the reception spoke excellent English. The heavy smattering of fingerprints staining the walls wasn’t unexpected, but the flair for design was. Exam options were displayed in sleek menu fashion, as if I was selecting a spa package. 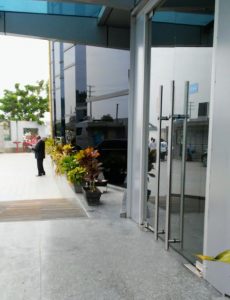 My First Visit to a Congolese Hospital

After a slew of paperwork I was called into a cubicle of sorts separated from the waiting room by a white curtain. The nurse worked deftly drawing my blood samples while he ranted about how difficult it was to get a job with an NGO (I sympathized with him) and suddenly I saw the glimmer of a needle and a vial. I did a very obvious double-take. “Vous avez votre vaccination contre la tuberculose?” the nurse asked, poised to draw from a vial. “Oui!” was my instant reaction, even though I have never had a TB vaccination. Not out of fear of needles or a desire to lie to this man, but because I had heard mixed reviews about the vaccine and I was caught off guard. At no point did we go over my immunization history, and wasn’t signing up for a TB vaccination without more information. He set down the needle and I breathed a sigh of relief (I later realized that the nurse wasn’t offering me a TB vaccine but a TB test, which is harmless).

Next was the dreaded urine sample, which my bladder is always staunchly opposed to. To make matters more comical, it was the tiniest urinalysis cup I had ever seen. There is zero chance of not peeing all over myself and this thimble, I thought to myself. After singing “Don’t go chasing waterfalls” to myself for a few minutes and triumphantly finishing my quest I realized there was no trap door to deposit the sample behind. It was a very obvious parade through a hall of waiting patients for me. Should I hold it by the lid? Does that look tidier? What if I didn’t screw the lid on all the way and it falls? I made eye contact with no one. I peeked behind the curtain and the nurse was busy with someone else. I turned to the ladies at the reception again, smiling awkwardly and pointing at my cup. They directed me to swaddle it in tissues and I waited for the nurse to notice me. Is this really the protocol? I could only laugh.

While waiting for a full chest x-ray (fun fact: this is the second time I’ve had this requirement for an overseas work visa, the first was for Australia) I was asked by the reception if I would like a cappuccino. Had I misheard? I said “oui!” as another surprised reaction. If I had to bet money, I would have said I was more likely to encounter a rebel group leader than a frothy cappuccino in the Congo. But a few minutes later there I was, sipping on a cappuccino, wowed by the novelty, next to a local who was partaking in the same. I have never been offered such a beverage in a hospital setting. In a country with some of the highest rates of poverty, illiteracy, and disease burden in the world, I had a feeling this was just a glimpse of the idiosyncrasies that exist in the DRC.

Clarifying note: I write this post in jest. Although there are pockets of wealth in the capital city, much of the DRC struggles with the provision of basic healthcare.