Key words: car ferry, moon landing, Paški sir, photoshopped, McDonalds, getaway car
After a round of coffees with Julian we bid our jolly host farewell and coasted the last bit of the main road to the life blood of Prizna; a car ferry to the Croatian island of Pag. For five euros each we cycled with our bikes onto the ferry before migrating to the top deck to take in the view. Approaching Pag we could already see the contrasting landscape. Compared to the greenery of the mainland it felt like we were landing on the moon. 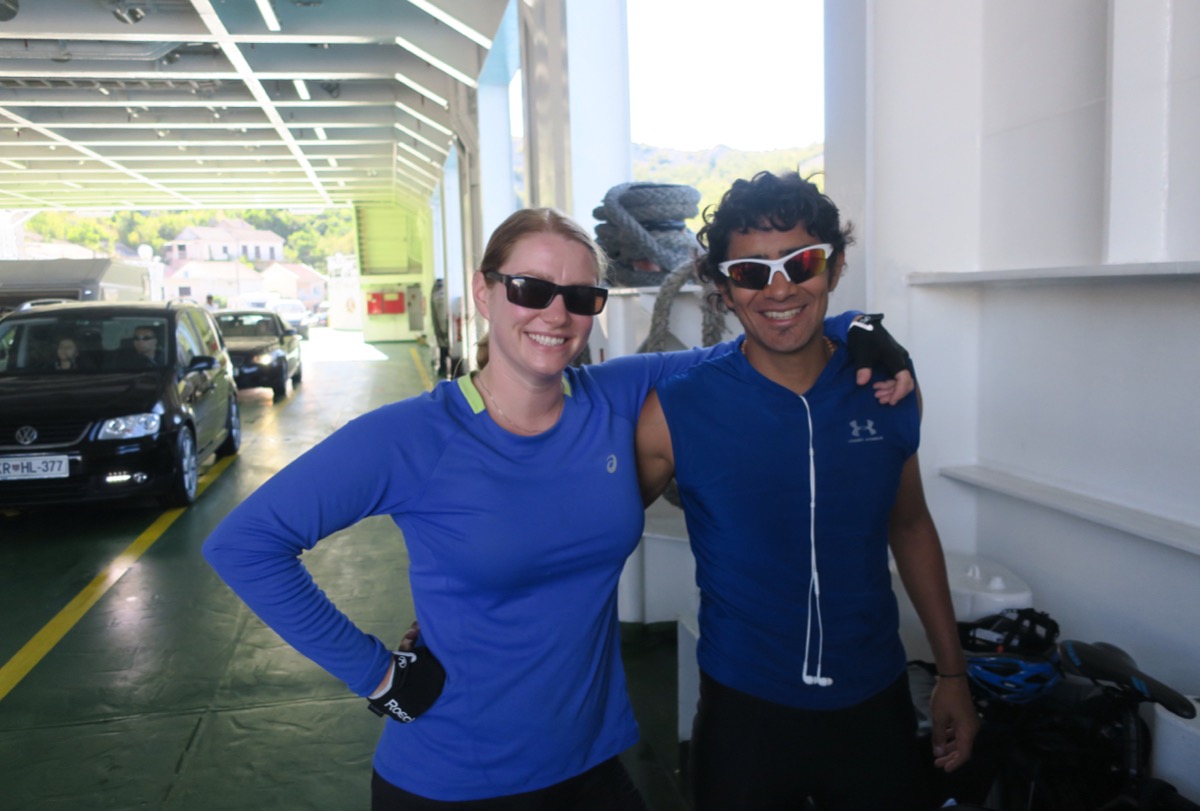 Aboard the car ferry 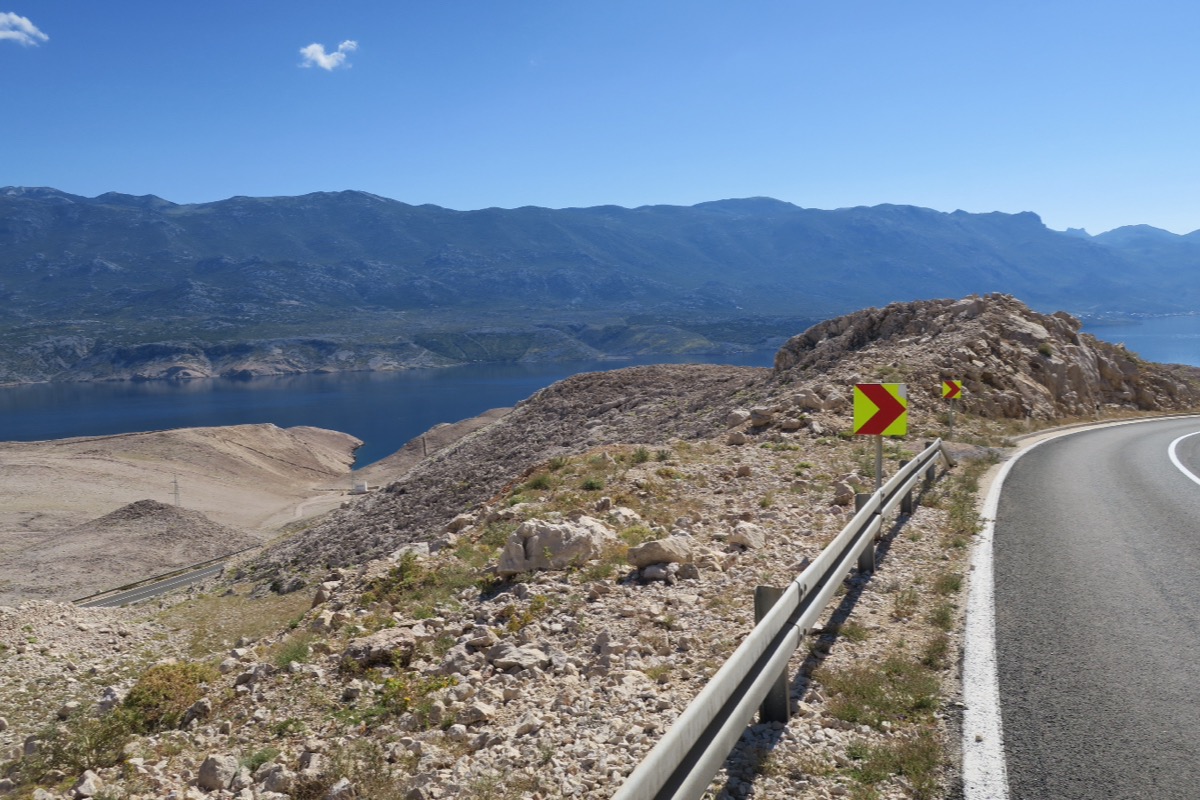 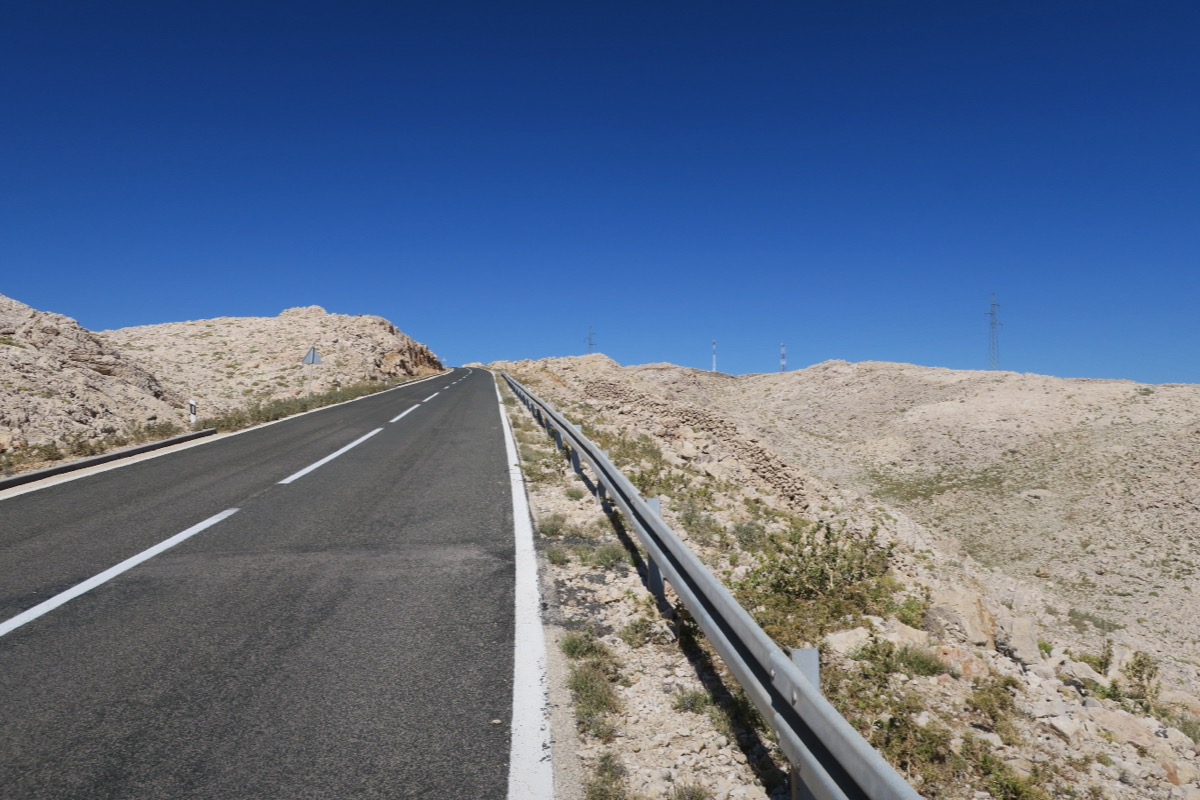 One of the first things we noticed about Pag were the countless squatty rock walls criss crossing the landscape. The walls looked like they were simply constructed by piling the ample resource into rows, but they didn’t look tall enough to keep anything in or out. So what were they for? 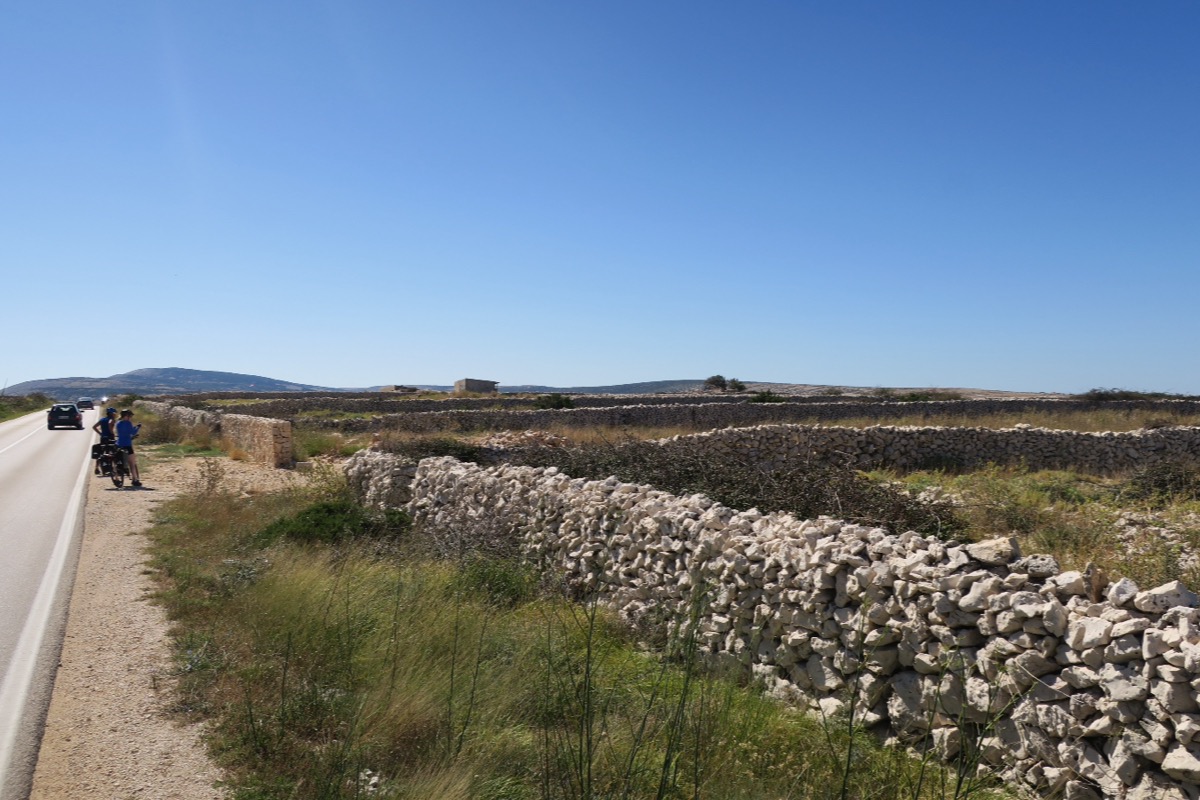 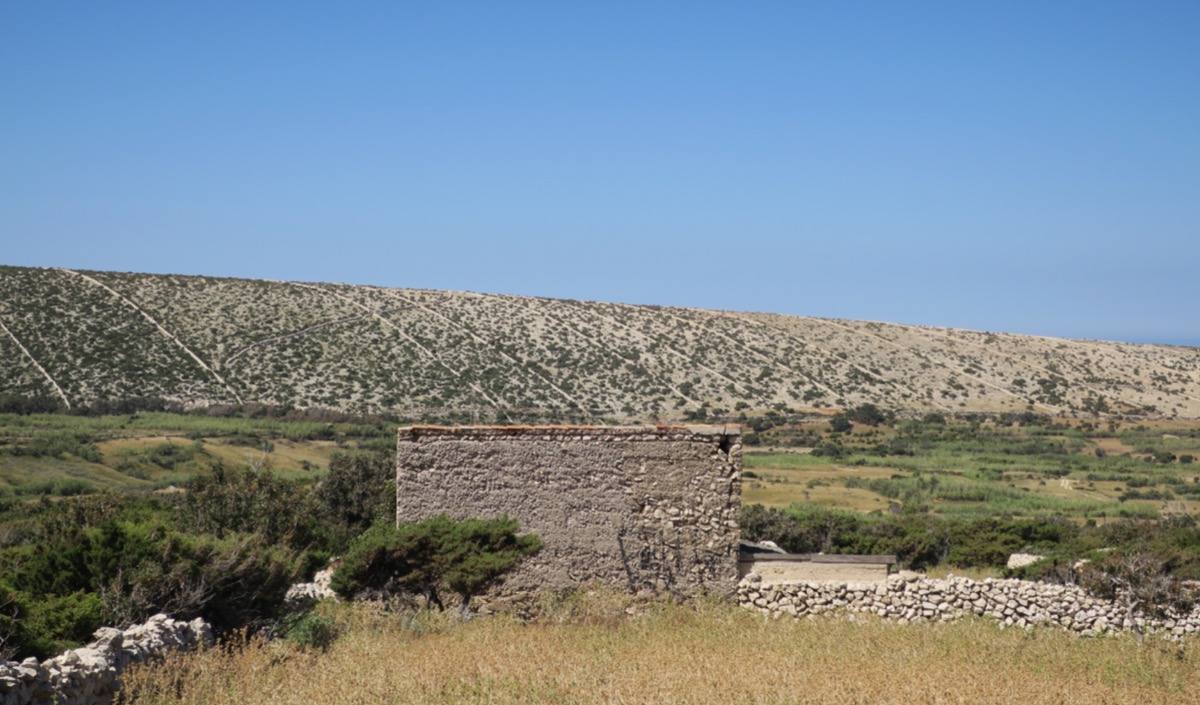 We had been cycling along these mysterious rock walls for some time when we spotted a very conspicuous sign reading “Gligora” and a smaller sign reading “cheese tasting”. We could use a break from the heat anyway so we stashed our bikes and ventured in. Fifteen minutes later we were feasting on two heaping cheese boards and having our questions about the stone fences answered. The fences were hundreds of years old and had originally been constructed to define property lines as well as contain the only domestic animal that could survive in this unique environment: a small, hardy breed of Croatian sheep. Foraging on local herbs and high salinity plants (the Bora winds carry salt from the sea to Pag, turning the countryside white with salt in the winter) these sheep produce a unique milk that adds to the unique flavor of the island’s pride and joy; Paški Sir cheese. 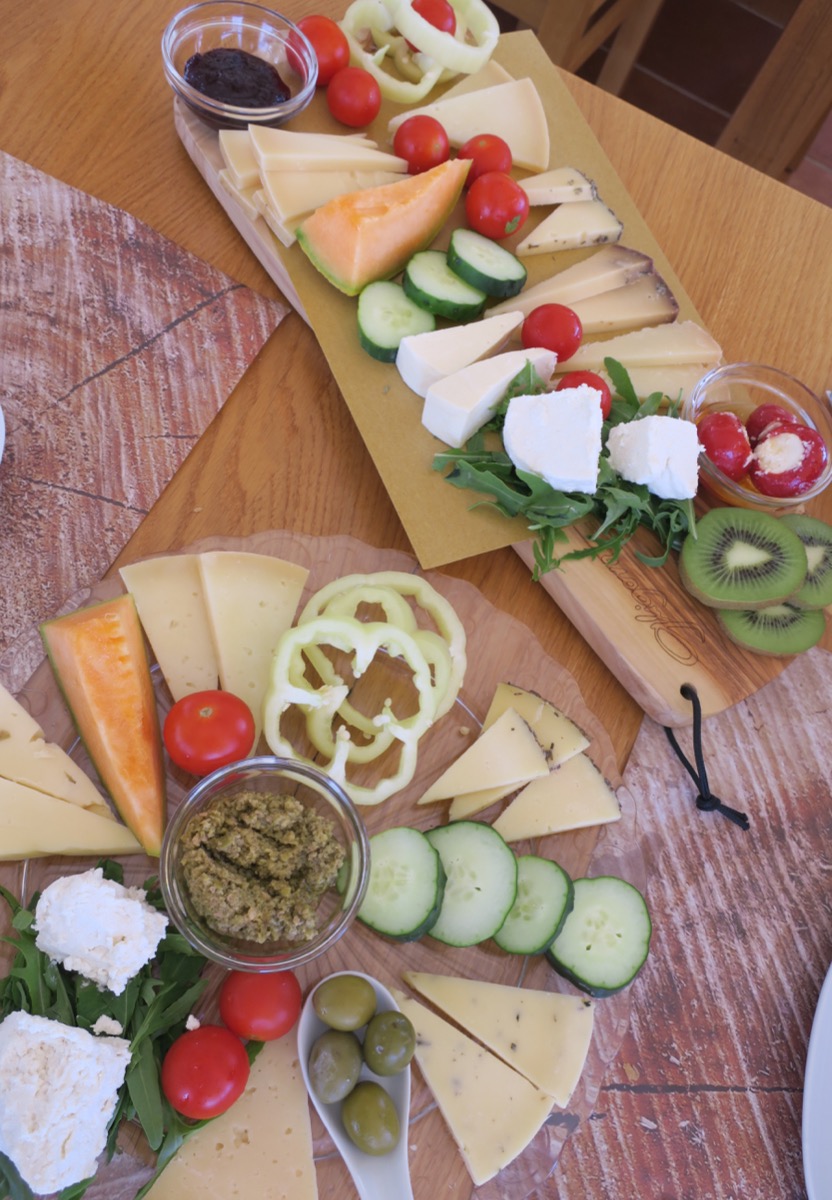 So much delicious cheese

Keen on seeing the process, we also partook in the tour of the Gligora cheese factory. But before we could we had to put on these swank outfits. 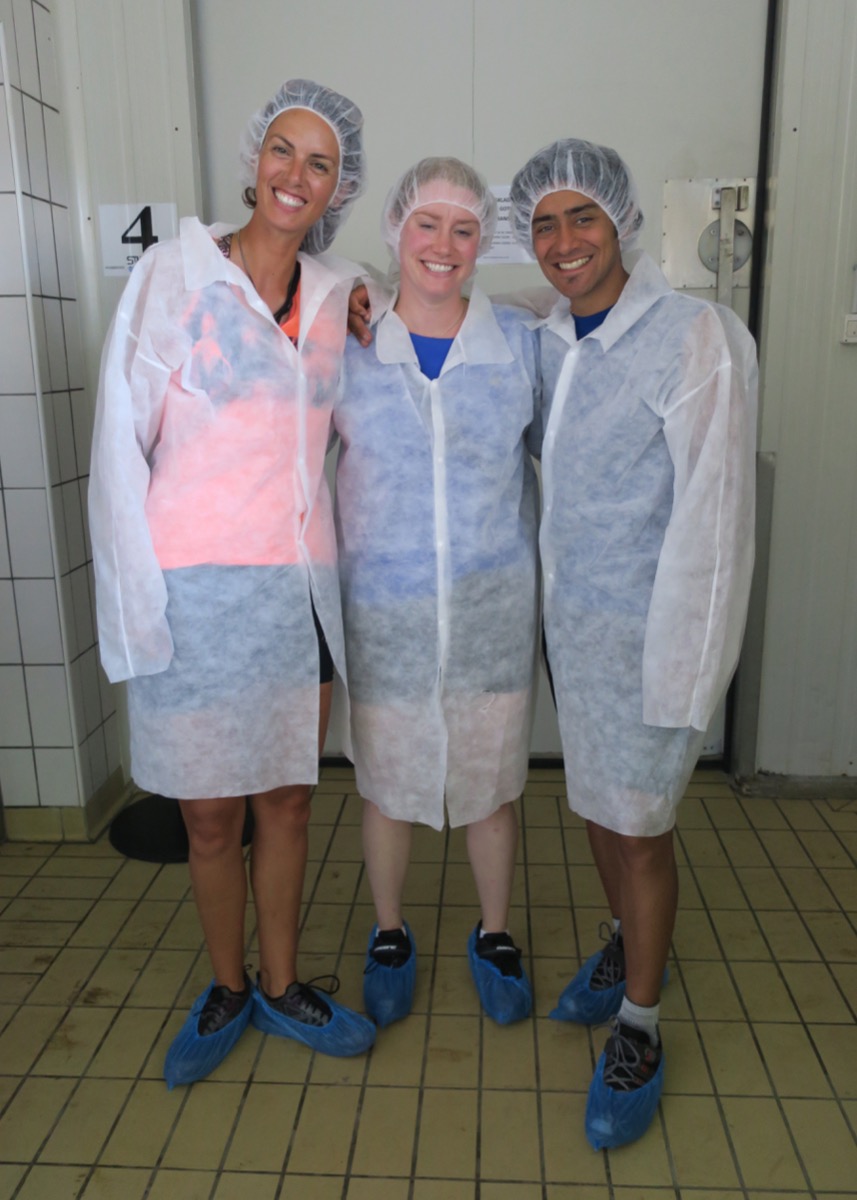 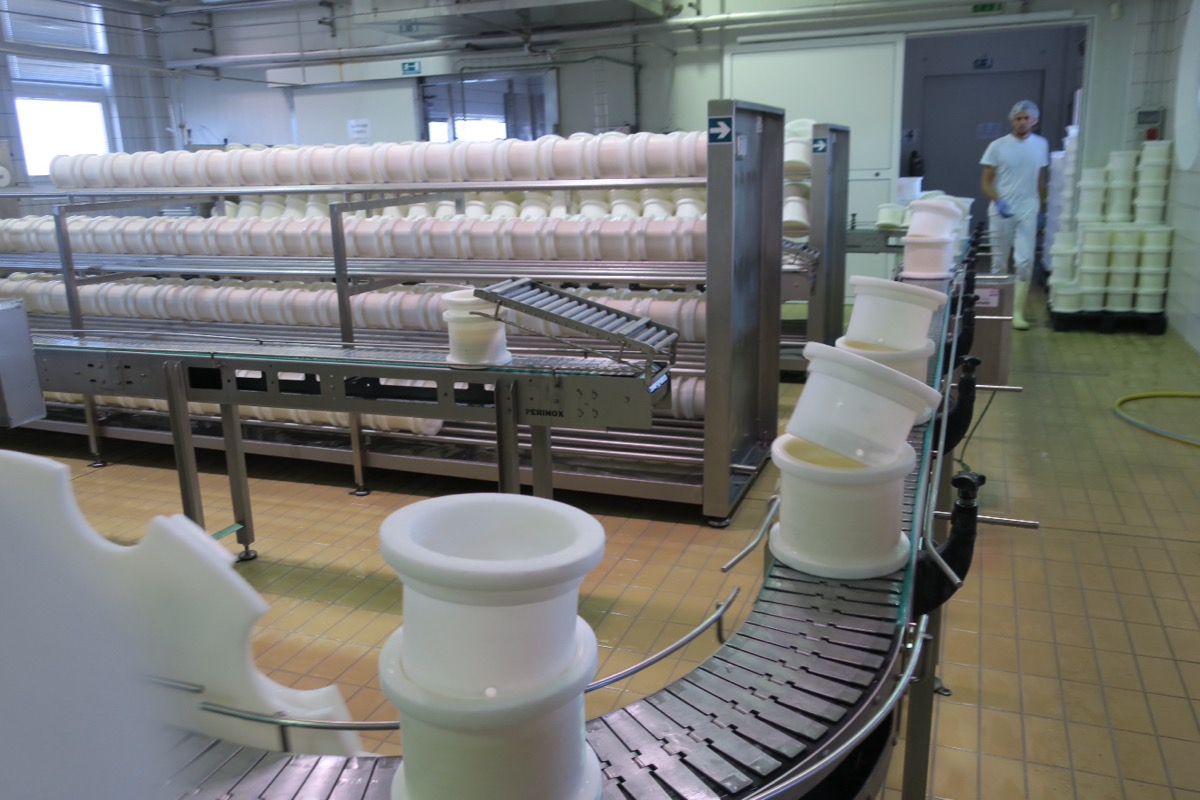 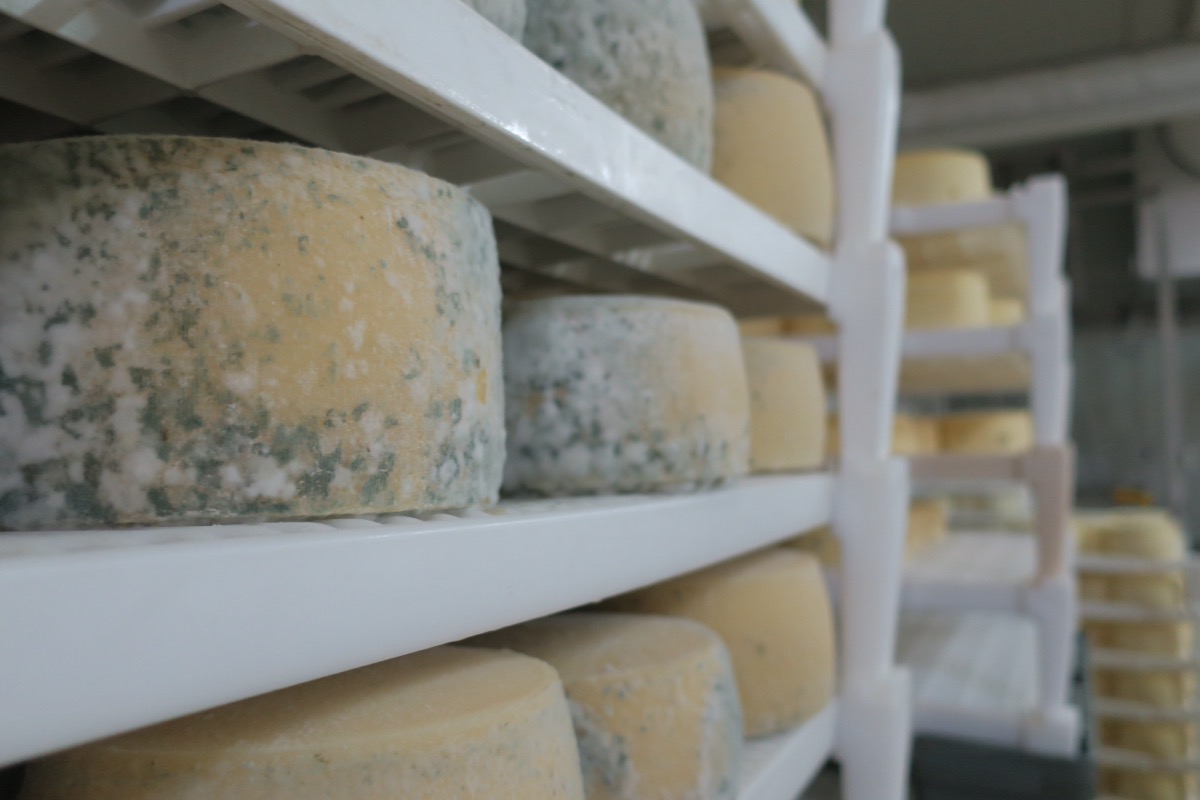 Getting better with age

We left Gligora thoroughly cheese-filled and happy we had stopped. It’s not everyday you find yourself on the island of Pag with some of the world’s best cheese at the ready.

We cycled on looking for our next stopping point, the tiny town of Pag. Our host Julian’s eyes had grown wide with excitement when we spoke of it the day before so I assumed it would be a descent spot for a swim. We climbed yet another sweat inducing hill and the sky opened before us. I brought my bike to a halt on the cliff’s edge and I’m sure my jaw literally dropped. Before me was one of the most beautiful landscapes I’ve ever witnessed. Endless dabbled blue mountains contrasted with barren sepia soils. Red rooftops speckled the shore along aqua waters so clear we could see the sea floor from our perch. I was mesmerized, humbled and overwhelmed in the instant. These photos don’t do it justice. 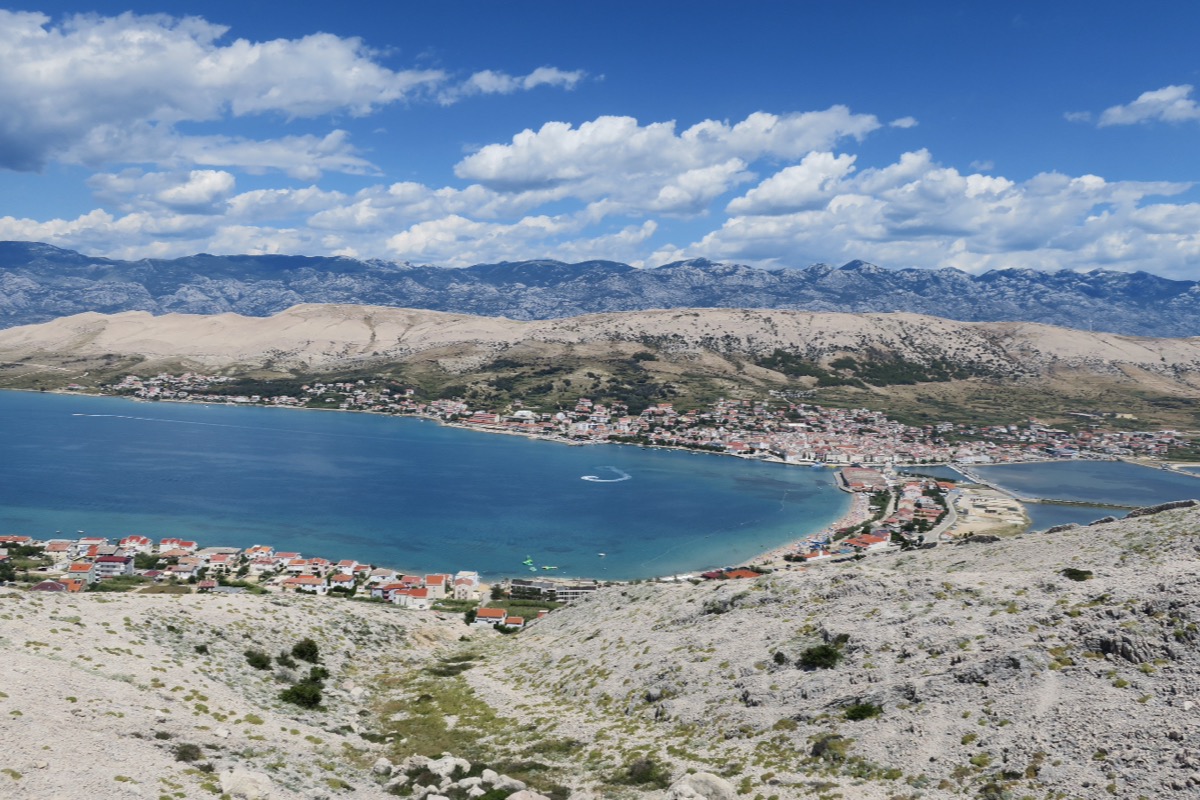 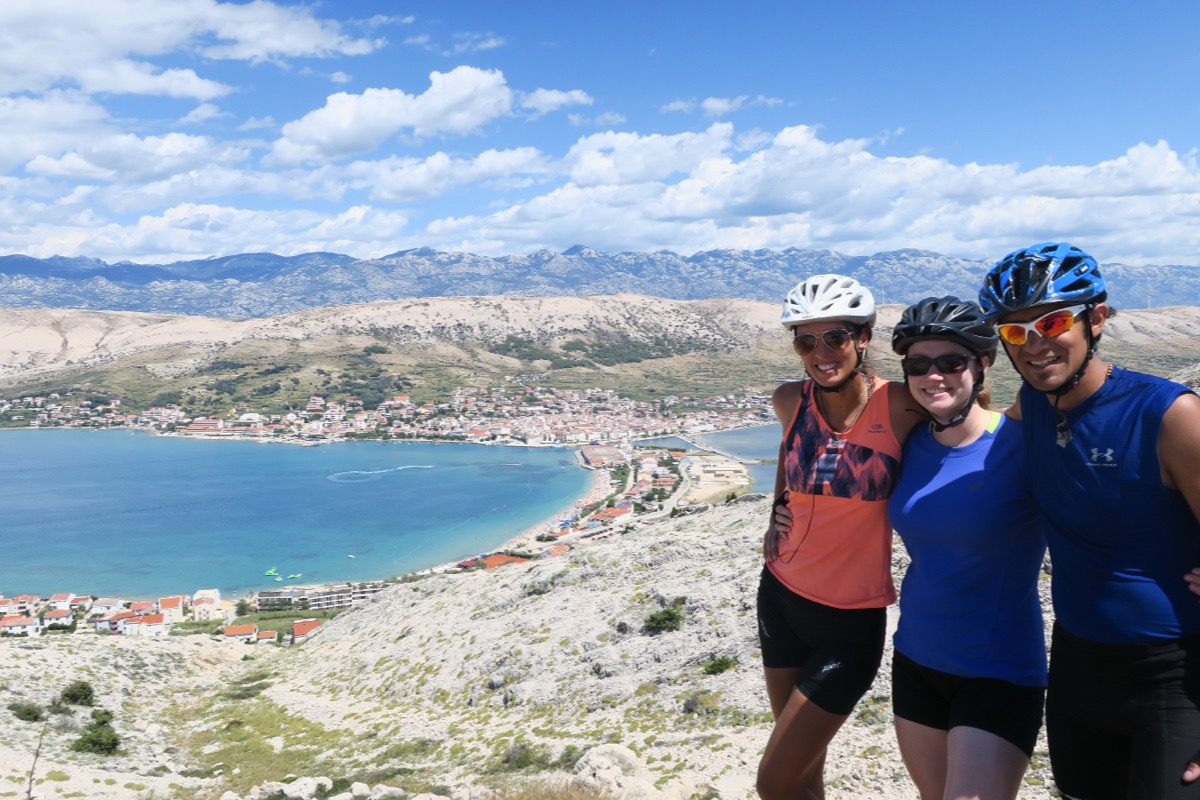 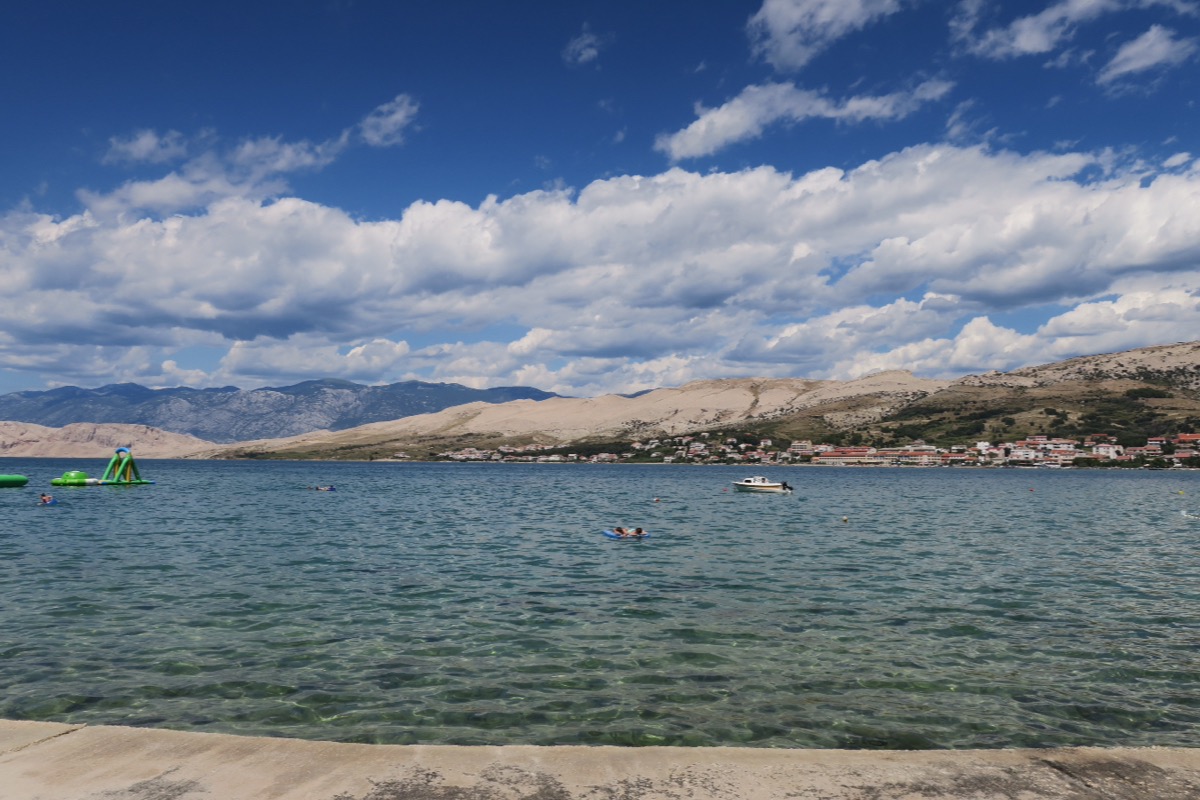 Swim spot of the day

The water was absolutely perfect and I could have stayed in Pag and floated in the salty aqua water all day. But we still had a lot of cycling ahead of us so I reluctantly emerged from the sea. As we cycled away from the town swaths of salt flats where Pag salt is harvested appeared beside us. It was all to perfect. Until next time Pag. 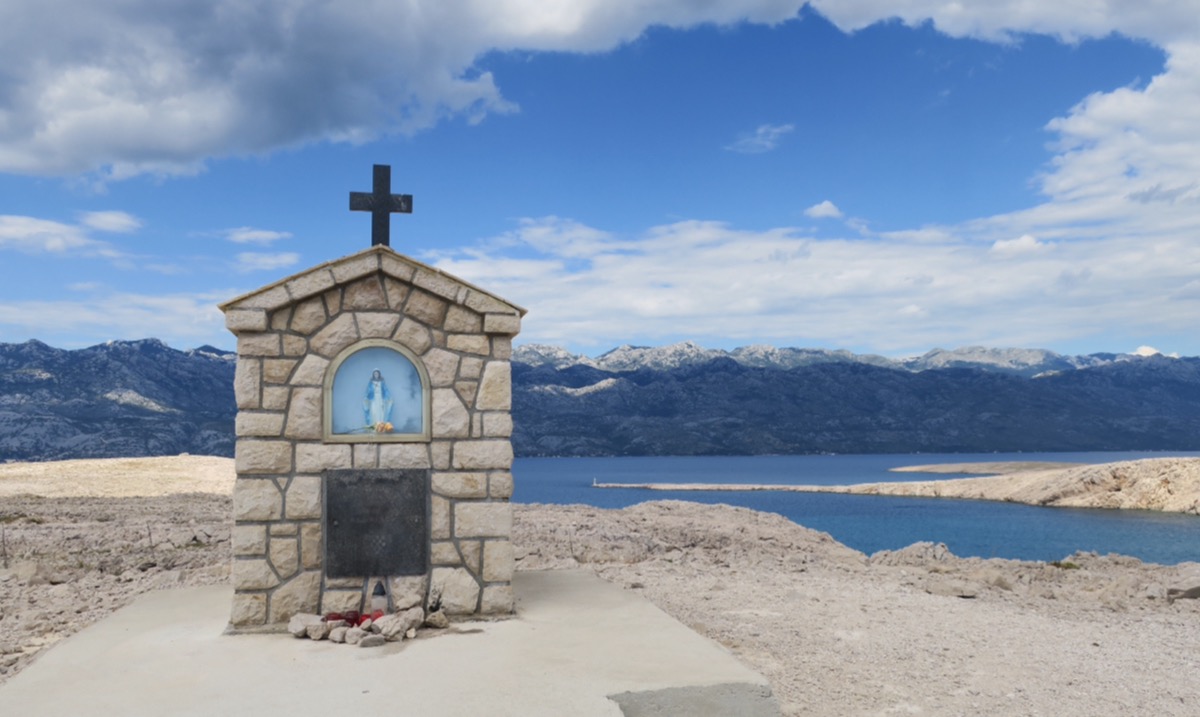 Picturesque spot near the only bridge connecting Pag to the mainland

We cycled onto the mainland and were again in green countryside that was thick with hills. Steep grades tested our might for the next hour or so and I was relieved when a sign signaled that we had finally arrived in Zadar.

As our encounter with Bora had set us back by two days, and Jess and Hector had a flight to catch in Split (Jess decided they should “split” in Split. Ya like what she did there?) we decided to make up some miles using public transport. Online sources said getting our bikes onto a train in Zadar could be hit or miss, so we decided to cycle straight to the train station upon arrival and ask a live person.

We arrived to where Google said the train station was and found only buses. I inquired with a ticket master inside. “No train station anymore.” She assured me. “McDonalds bought it.” As if I needed a reason to detest McDonald’s more. She then informed me that the buses rarely take bikes. Only once every other person and article of luggage has been loaded will they take a bike. That wasn’t very comforting.

We made it to our lodging and spent the rest of the evening brainstorming how to get ourselves and our bikes to Split in one piece the following day. We finally bit the bullet and booked an overpriced rental car big enough (we hoped) to fit us and our bikes inside. It was our only hope for getting us back on track and Jess and Hector back to Germany in time for their epic international move to Malaysia. 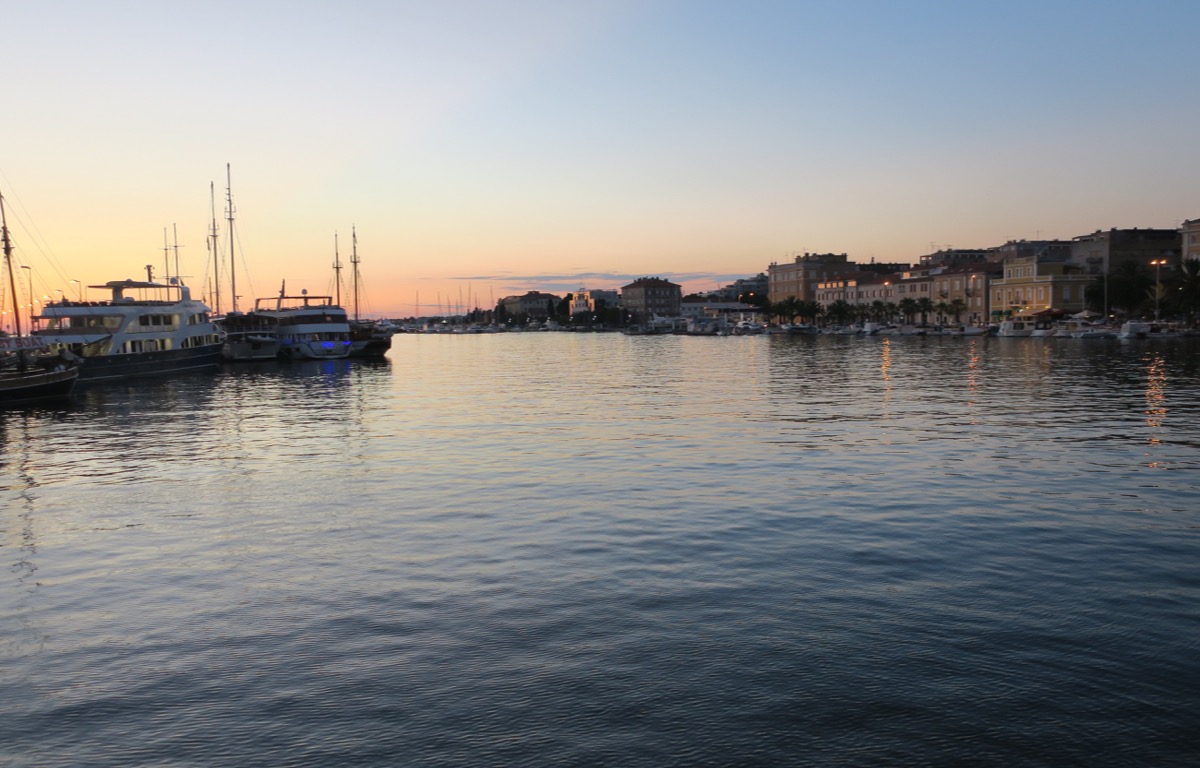 The sun sets over Zadar