I consider myself a seasoned cyclist and traveler, but day one of this epic trip takes the cake for murphy’s law being in full swing.

It began when I met Bita at the Barcelona Airport two days before our trip was to begin. I pictured her bounding through the arrivals doors with her bike box in tow. Instead, a travel weary Bita emerged three hours later after arduous attempts to locate her bike. The airline had lost it and couldn’t confirm where it was. Per Bita’s flight connections the bike could have been left in Houston, Miami, or Madrid. Ugggh. The next day was one of uncertainty as we tried unsuccessfully to pry information from the airline. After a secondary trip to the airport the following day Bita was reunited with her bike and we started assembling it in the wee hours the night before our departure.

Much to our chagrin, a piece was missing from the headset (section of the bike that attaches the handlebars to the frame, slightly important!) and needed to be replaced to have a functional bike. We found a local bike shop online, however, it didn’t open until 10:00am. So much for our 8am start on day 1.

After waiting for the bike mechanics to see the bike, we were informed that they didn’t have the missing part. A very methodical mechanic named Dave told us our best option was to cycle to another shop and see if they had the specific part. He gave us the part specifications, a detailed map and a bike for Bita to borrow while hers was being worked on. “By the way”, he said, “the other shops are only open until 1:30 or 2:00pm (it was just after 1:00pm at this point). Also, the bike I’m lending you was previously a stolen bike. Should someone throw a punch at you, it may be the original owner.” What is this, the amazing race? We didn’t have much time to process that last remark because we were already out the door racing the clock through tiny Spanish streets and major plazas; channeling our inner bike messengers as we darted through tiny gothic streets and around traffic.

We cheered shamelessly when the first shop had our part and zoomed back. While the bike was being worked on we also got an international phone together. We had considered forgoing this but man, I can already tell Google maps is going to save our lives and sanity this trip.

As we were preparing to hit the road, Sunny realized that she had lost her atm card. Not the best feeling when you are thousands of miles from home. 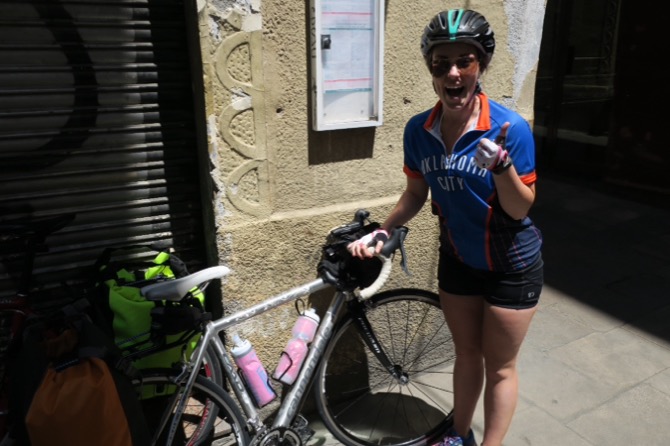 We hit the road at approximately 2:30pm and rejoiced in the commencement of our trip. So much for an 8am start! 24 hours prior we were down a bike, an international phone, and unknowingly a key bike part. Things were looking up and we were so glad to finally be on our way. If all went well we imaged we would cruise into our destination city between 7 and 8 o’clock.

We cycled briskly along the vast Barcelona beaches which were dotted with tanning bodies, runners, cyclists and waddling tourists. The day was gorgeous and our spirits were high. Our cycle trip for Spain to Greece had begun! 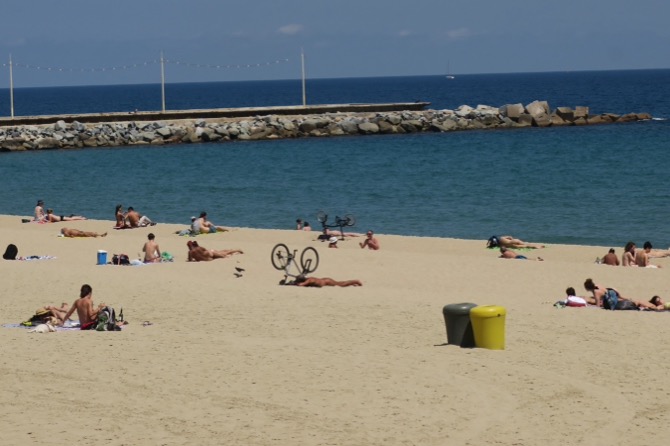 We worked our way out of the city and followed a wide running/cycling path for miles. The day couldn’t be more perfect and the vast cycling paths seemed endless. Maybe we’ll stay off highways altogether, take advantage of bike paths along the coast, and arrive to our destination earlier than expected, I thought smuggly.

Not long after the perfectly manicured bike paths ended and we merged onto rolling highways. Little shoulder but the traffic wasn’t overwhelming. We were cruising at a good clip and enjoying the scenery when along the side road appeared a very curvy lady, dressed provacatively in vibrant pink and twirling a bright pink parasol. Was I seeing things? This woman looked so out of place on the shoulder of a dusty highway with no civilization in sight. A few minutes later a similarly dressed lady was perched along the road, this time in light pink. This scenario repeated itself twice more. I’ve been to a red light district before, but never a hot pink highway!

The highway wove through several towns and lots of beautiful countryside. Red poppies speckled green fields. Soon we were in amore residential space, and the roads become steep. Bring on the elevation! After some intense Climbing we reached a dirt road that continued to ascend. Google maps hadn’t said anything about climbing up dirt or gravel. We checked, double checked, and rechecked the map. I glanced woefully at our skinny tires. Here we go. 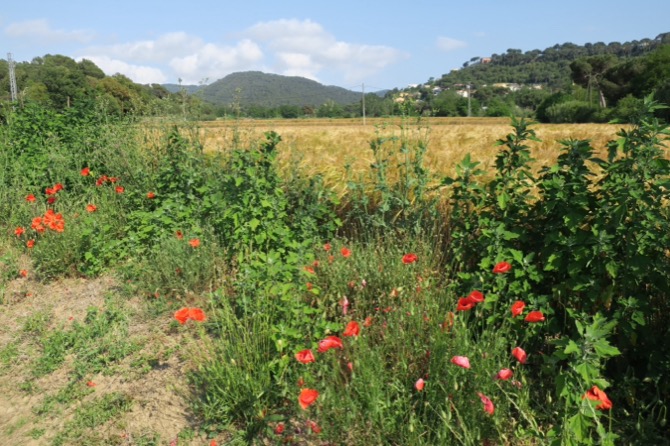 We started cycling, but the loose dirt and gravel soon had us walking alongside our bikes. Sliding around in the dirt and dust in the heat was tedious and incredibly slow going. The speed we had enjoyed earlier evaporated as we toiled through dirt and gravel. The top of whatever mountain we were on seemed to be always just out of reach.

Finally we reached the last crest and welcomed some downward slopes. But unlike pavement, these downhill stretches on slippery dirt and gravel were not a welcomed reprieve. Skidding around on our skinny tires had us all on edge, and walking the bikes down was almost just as bad.

At some point during our descent, around a bend and through some bushes I saw Bita start flying down the dirt path, only to realize her bike had stopped and she kept going. Uninjured, we proceeed to laugh and laugh and laugh.

I noticed a Spanish woman watching our antics from her stoop, and pictured her shaking her head at the silly foreigners falling off their bikes. Instead, she walked out to us and motioned to Bita’s knees asking if she was ok. Then she asked if we needed water. What a sweet lady! Sadly as much as we needed water we mentally needed to get off this dirt road more!

We finally arrived in the tiny mountain town of Orriús and stopped at a cafe for snacks, cold beverages and to mentally regroup. That dirt road took us by surprise and we just needed to sit for a moment. After emptying our bladders, filling our water bottles and collecting our thoughts we walked to our bikes and Sunny poured me a handful of Spanish knock off cheetos. Splat! Into the center of my vibrant orange snacks fell a warm dollop of bird poop. “SHIT!” Was my immediate and very appropriate response. 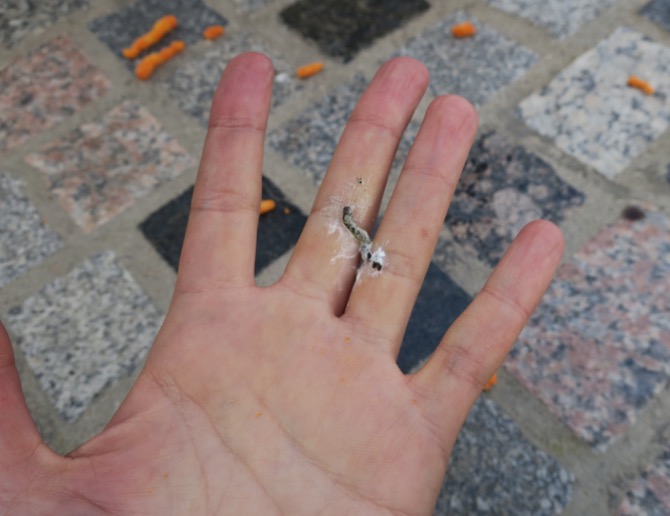 Was not expecting that with my cheetos!

A follow up hand washing later we were back on the road, singing the praises of pavement and coasting at a wonderful speed as the mountain unfolded into valley. We made our way to the center of a coastal city named Mataró. At this point I was feeling jazzed with my international phone and google maps that guided us effortessly through the city. I grabbed the phone to glance again while cycling and oops, the phone fell to the street with the sound only a phone whose cover opens and battery flies out can make. It now has a subtle spiderweb in the corner and decides to turn off at will.

Our bodies tired and mentally needing a break we decided to power on to the town before our destination for dinner. We arrived in Sant Pol de Mar and our bedraggled crew plopped ourselves down at a friendly and beautiful little pizzeria called La Selva. We gorged ourselves on pizza, pasta and proscuitto wrapped melon. The pasta dishes were as big as our faces but we were up for the challenge. Not a morsel was spared. 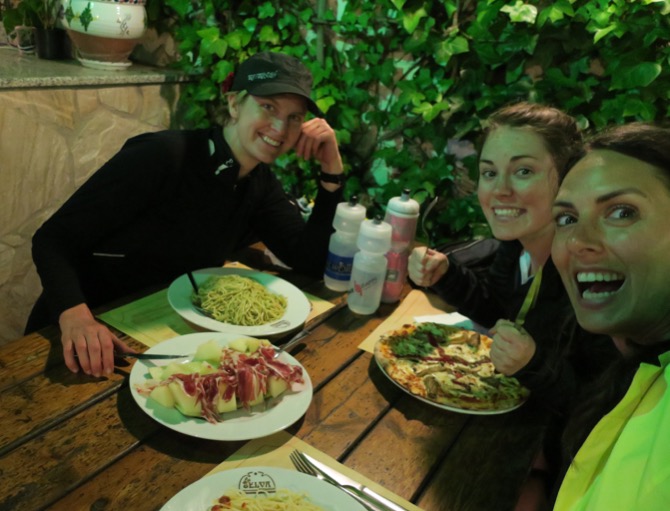 When you cycle all day you get to eat whatever you want!

We pushed through the last fifteen minutes of cycling, but were met with confusing directions to our rented bungalow. A half an hour later we finally carried our fatigued bodies into our bungelow and fell into a deep sleep. We had planned on arriving at 8pm and here it was nearly midnight. What an incredibly memorable first day full of struggles, challenges, and oddities. I was reminded of what my cycling partner Jess said after our first day of cycling across the US. “Well we’ve come this far. We can’t turn back now!”