Day 27 Day Off in Naples

Today was technically our day off, but in an effort to save us from a 90 mile day the day before we stayed outside of Naples and were cycling in today. Because fifeteen miles just doesn’t count as a day of cycling for these road warriors *brushes shoulder off*.

We departed our surprisingly high end hotel in the middle of nowhere and cycled energetically along country roads. Today we would spend most of the day exploring Naples aka Napoli, the fabled birthplace of pizza.

The countryside soon transitioned into grungy city streets unique to what we have experienced thus far on the trip. Some may call it bohemian, others downright dirty, whatever one calls the northern suburbs leading into Naples they are full of life and dotted with countless fruit stands paying homage to the fact that southern Italy is the country’s breadbasket. 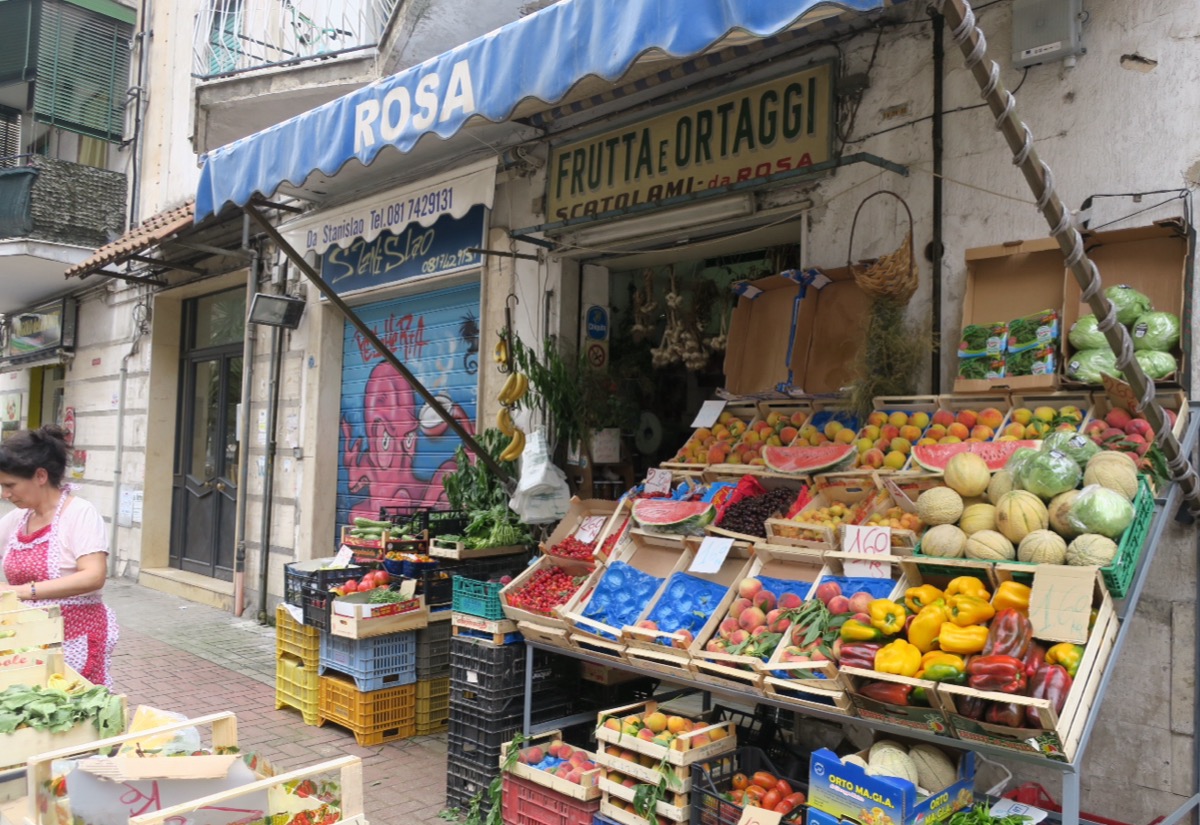 We stopped at a fruit stand and were wowed by the variety and size of their peaches. Red peaches, yellow peaches, flat peaches, peaches bigger than your fist. We each grabbed one and ate them slowly as we stood with out bikes and watched the traffic weave by. 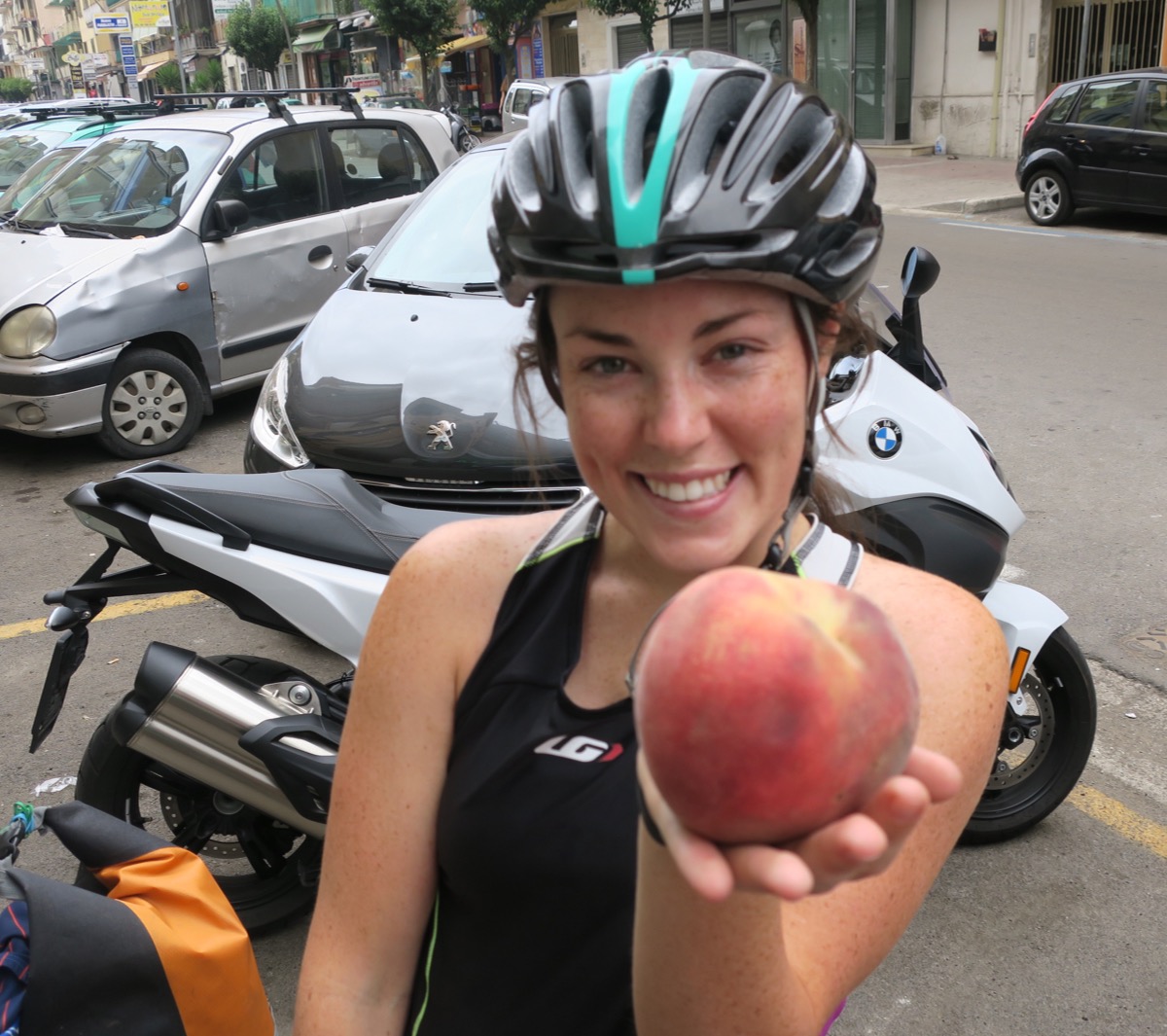 Bita and the giant peach

Bita popped into a shop as I was finishing my gargantuan peach when a hand appeared from a car and began waving something white. I checked to see if someone was behind me. No, they were definitely motioning to me. Then I wondered if our bikes were in the way and they wanted us to move them. I walked to the car to find an older Italian man smiling and handing me a tissue to use on my sticky hands and face. Thank you good sir!

We carried on in much the same fashion until our highway made a steep descent into the city. While coasting I scanned the scene and saw clusters of high rise apartments that looked abandoned and screamed urban decay. We definitely weren’t in Rome anymore. 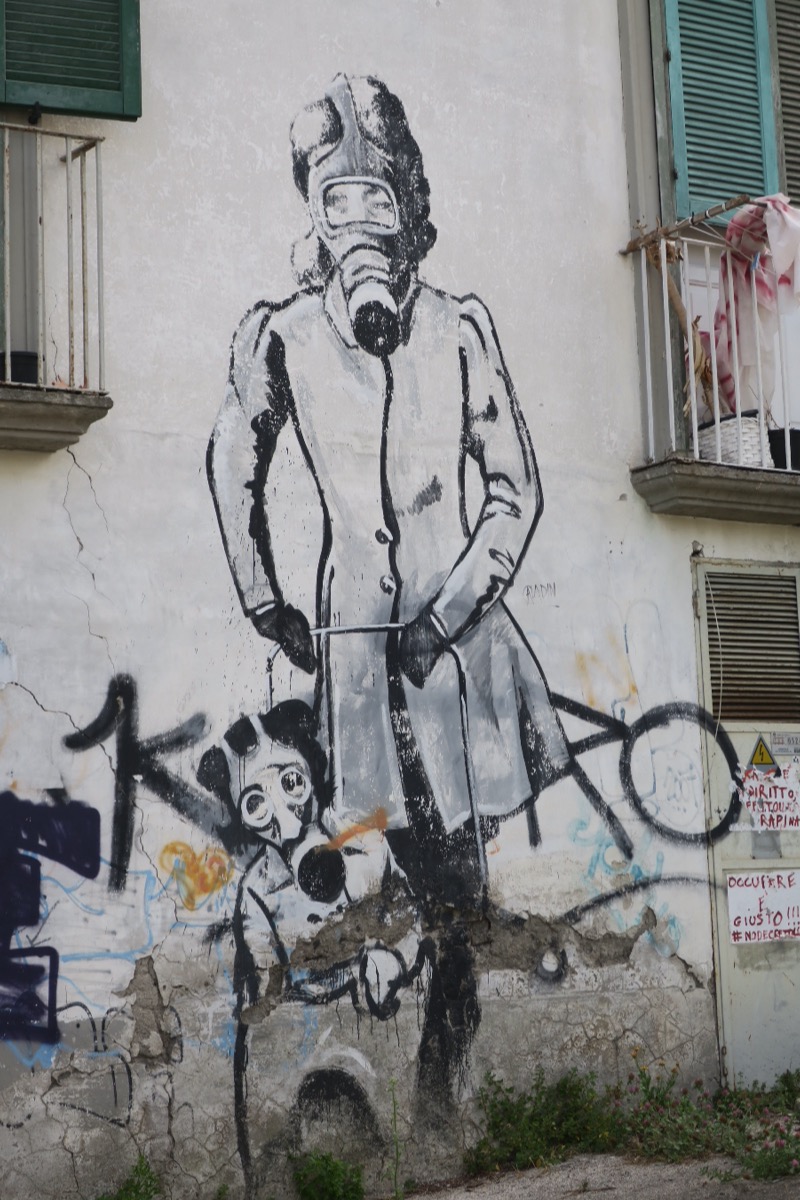 We checked in at our hostel, squeezed our bikes onto a balcony and donated our giant lemons from Vincenza to the kitchen before heading out to explore Naples. We had our sites set on Sotterranea, a lesser known side of Naples that exists below the surface. 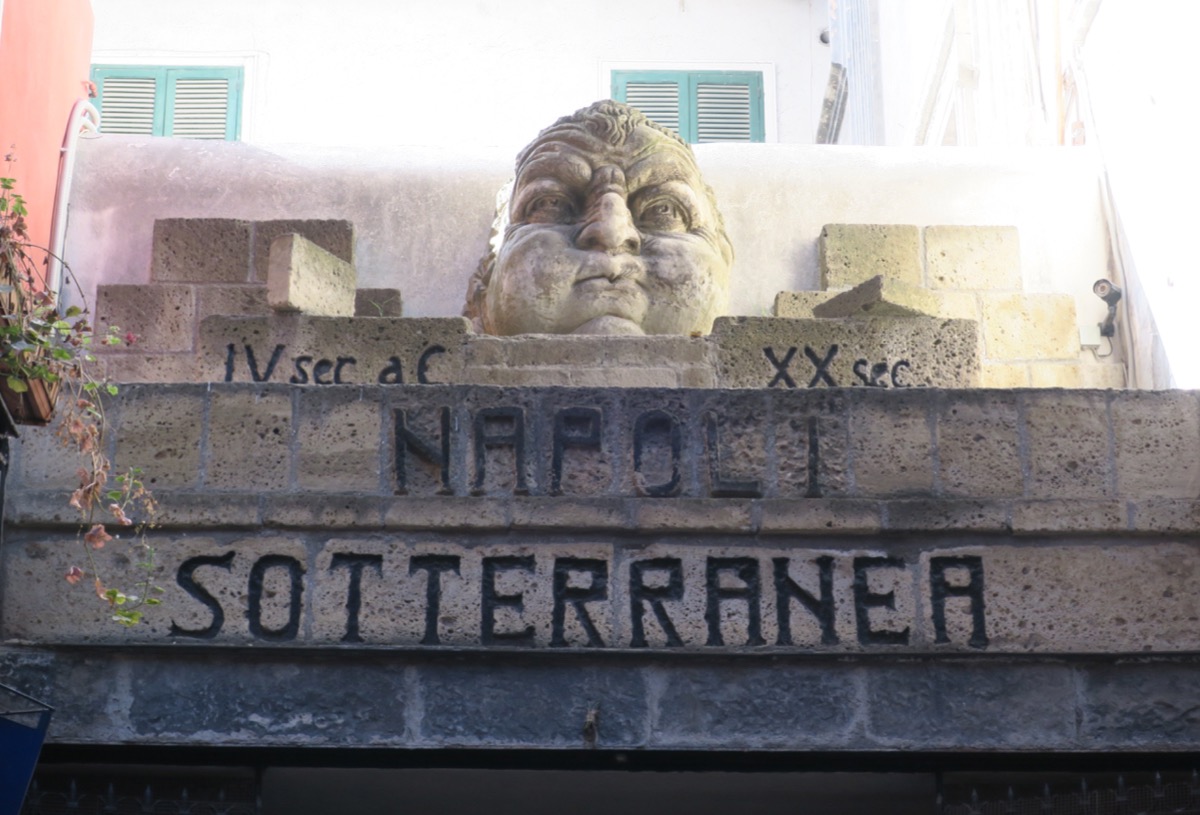 Above the entrance of Sotterranea

We signed up for our first tour of the trip–a guided underground tour–and wandered through a few shops before the tour began. We even popped in for limoncello tasting. Yum! As we draw nearer to Sorrento (famous for its lemons and limoncello) the range of available limoncellos and intricate bottle designs has increased drastically.

We followed our bundled up guide (not her first rodeo, it gets cold underground) down 200+ stairs into the first cavern of underground Naples. It was here we learned that the extensive underground system under the city is not due to geologically formed caves, it’s due to creative resource management. The city of Naples sits on a layer of compressed ash known as tufo. This strong, textured stone was ideal as a building material, so in 470 BC when the Greeks were building their “Neopalis” (New City) builders would dig below the center of the planned structure, use wedges to break off chunks of tufo into rectangular blocks, and hoist them to the surface to build the walls. This led to the creation of many large caverns below the city, which were increasingly connected in honeycomb fashion and later the Romans would use them as a aquaduct system. During WWII these same underground caverns were used as bomb shelters, with families staying in them up to weeks at a time while terror literally rained down. 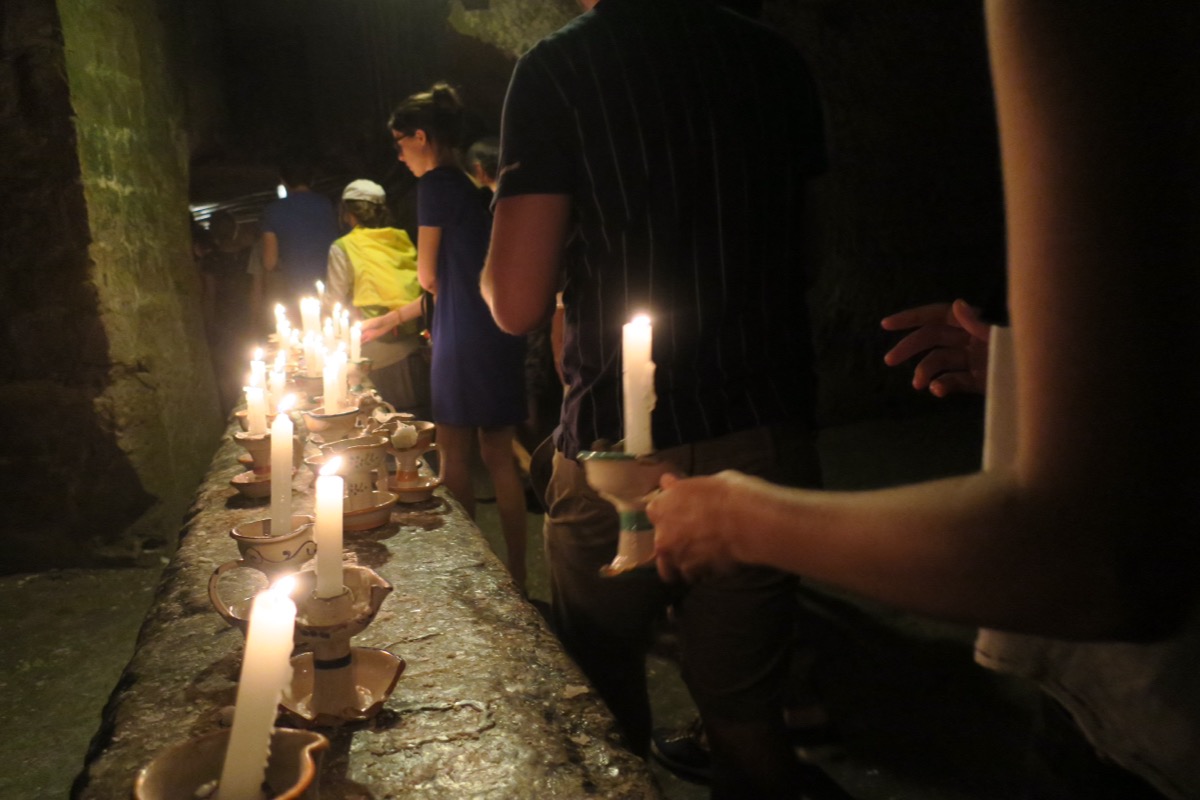 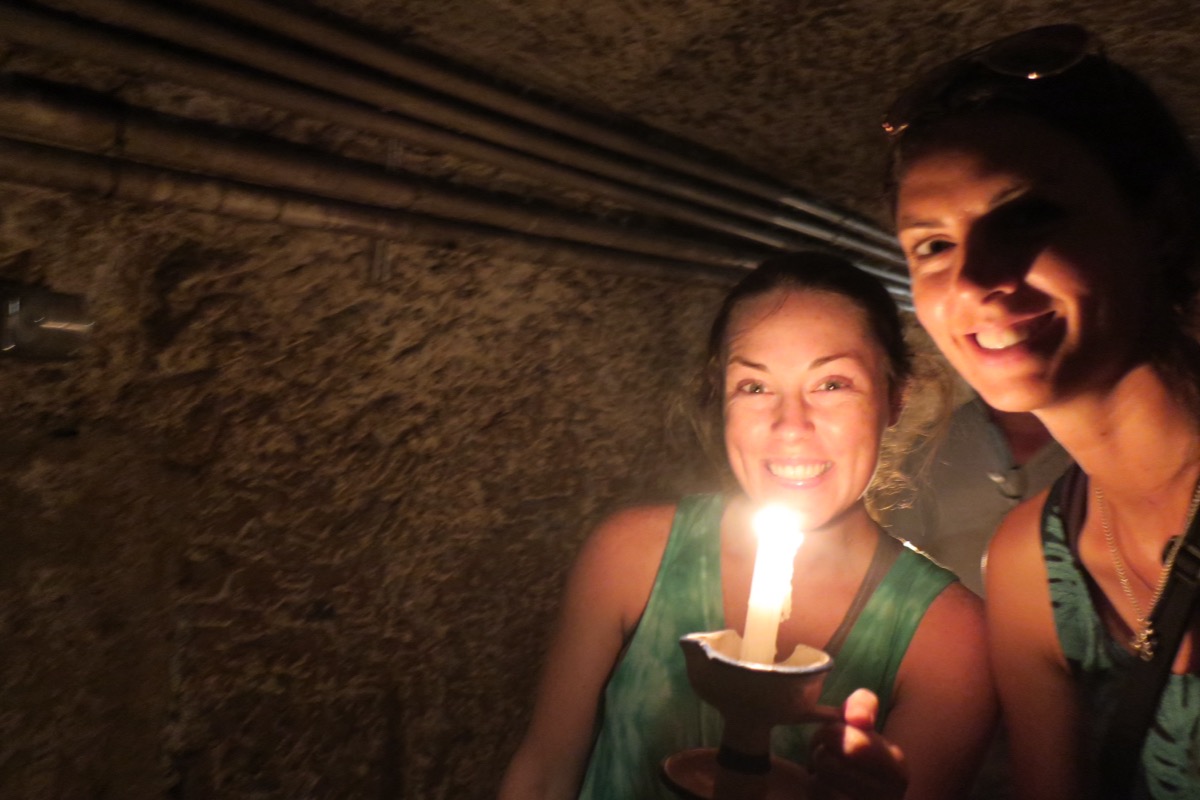 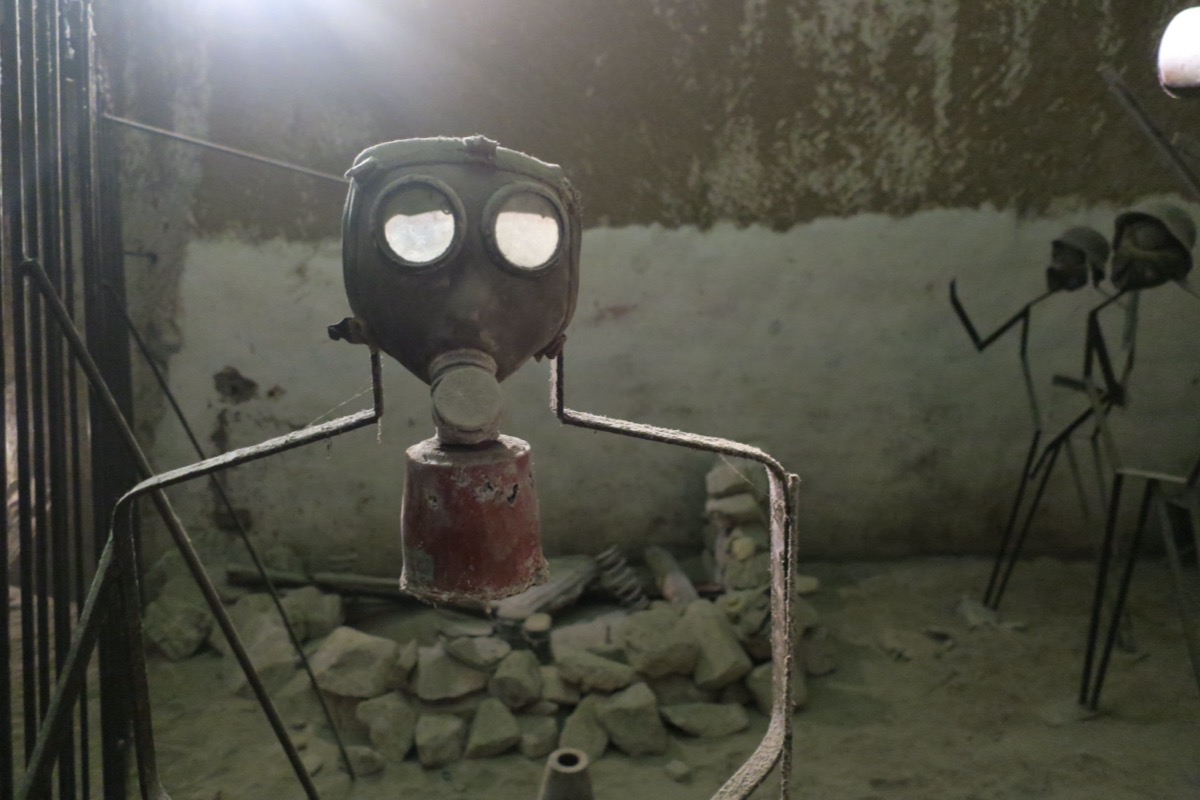 Tribute to the carnage of WWII

We wandered the city for hours after our underground experience and tried some of the famous Naples pizza. It was as good as they say. Fresh toppings, incredible cheeses, crust so light and thin you fold it in half to eat it. After downing a pizza each, we decided to take the cable car to a nearby peak for a view of the city and Mount Vesuvius, the active volcano responsible for the layers of ash leading to tufo and later the disaster in Pompeii, but we’ll get to that later. 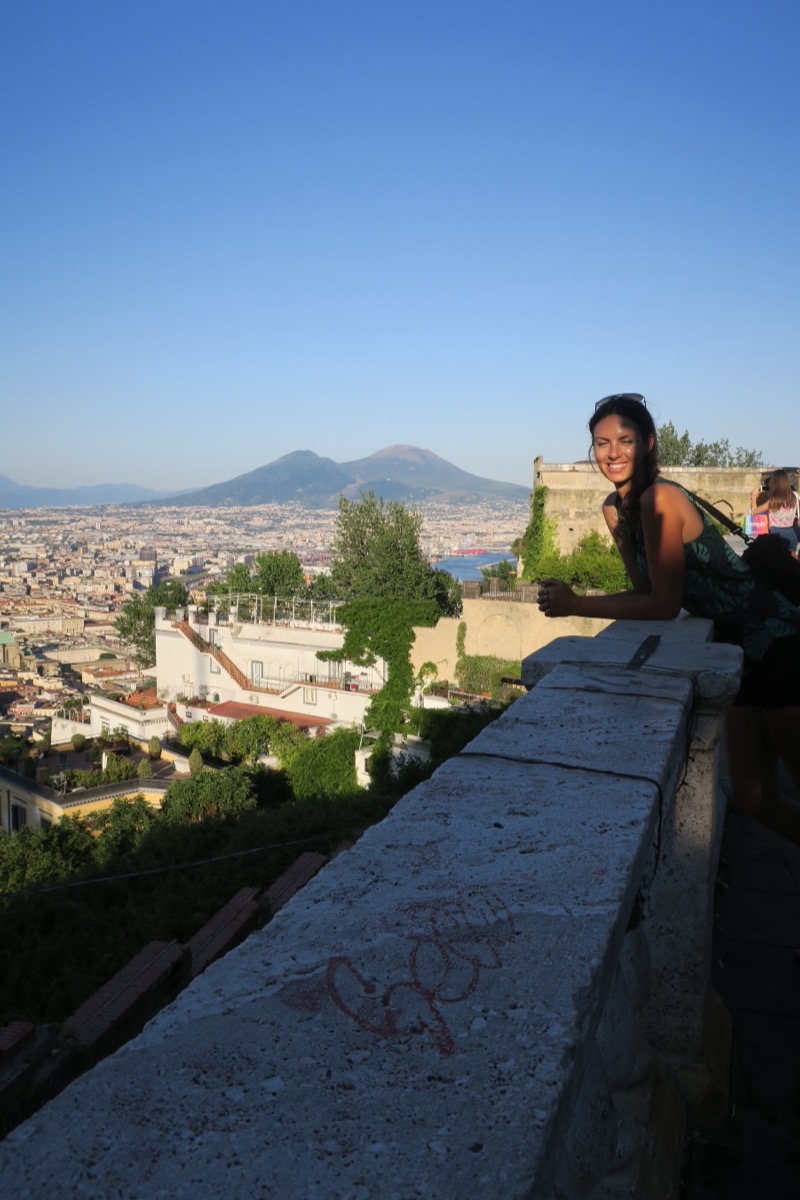 Taking in the view