Day 50! This was the official beginning of week 8 for us and we were thrilled to be cycling in Illinois. We were also excited to have Jess’ brother Jake along for the ride; giving him a glimpse of what life is like on the road. 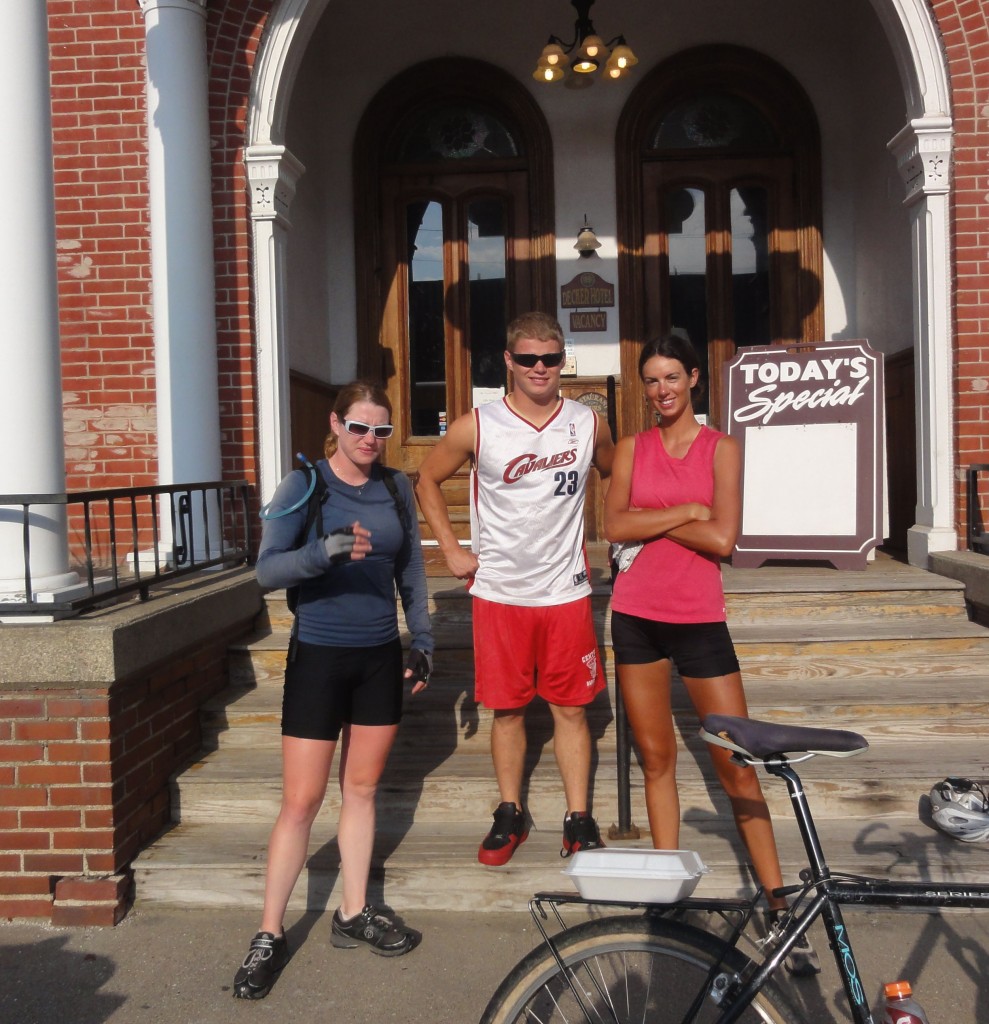 Jess, Jake and me outside of the Historic Decker House Hotel in Maquoketa, IA 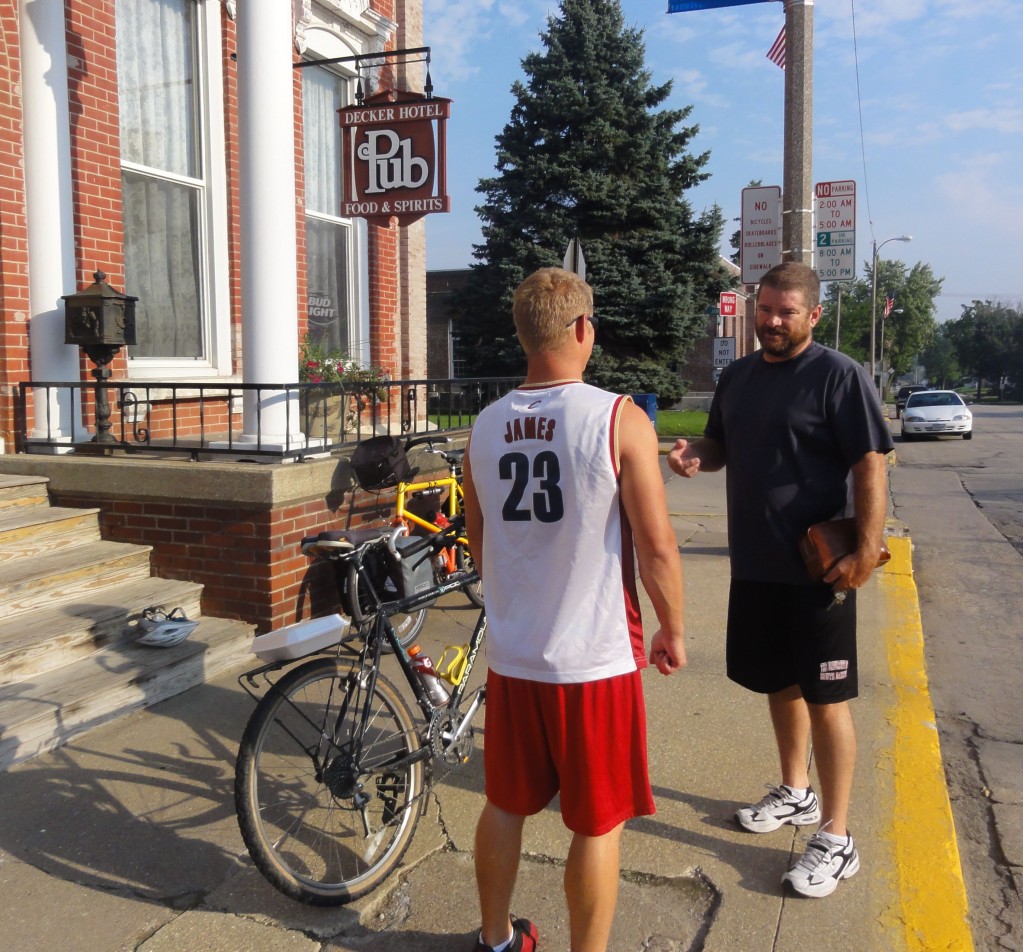 The beginning of our day was a little rough on Jake. Within the first few miles he had already been nearly missed by a vehicle, was drenched in sweat from the heat, had abandoned his basketball shirt and shorts and was angrily swatting at the countless insects that crossed his path. Around mile five I heard a yell and the unsettling crunch of upset gravel. I turned around to see Jake’s bike laying on the side of the road and Jake running from it. Jake had been stung in the face by a wasp of some sort. The cycling gods were not smiling down upon Jake. 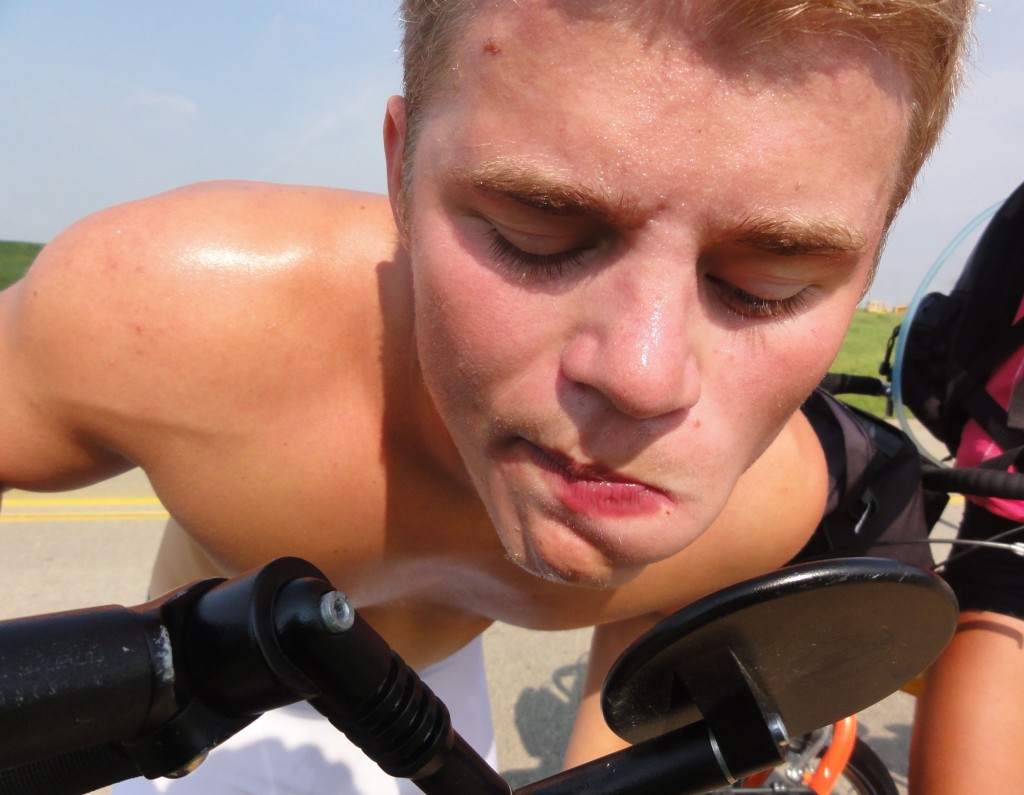 Just before Sabula, IA we stopped off at a park to make peanut butter and jelly sandwiches and stretch our tired bodies. Jess began chatting with an older couple at the park who turned out to also be from Oregon! To add to the coincidence they were also Portland, ME bound! 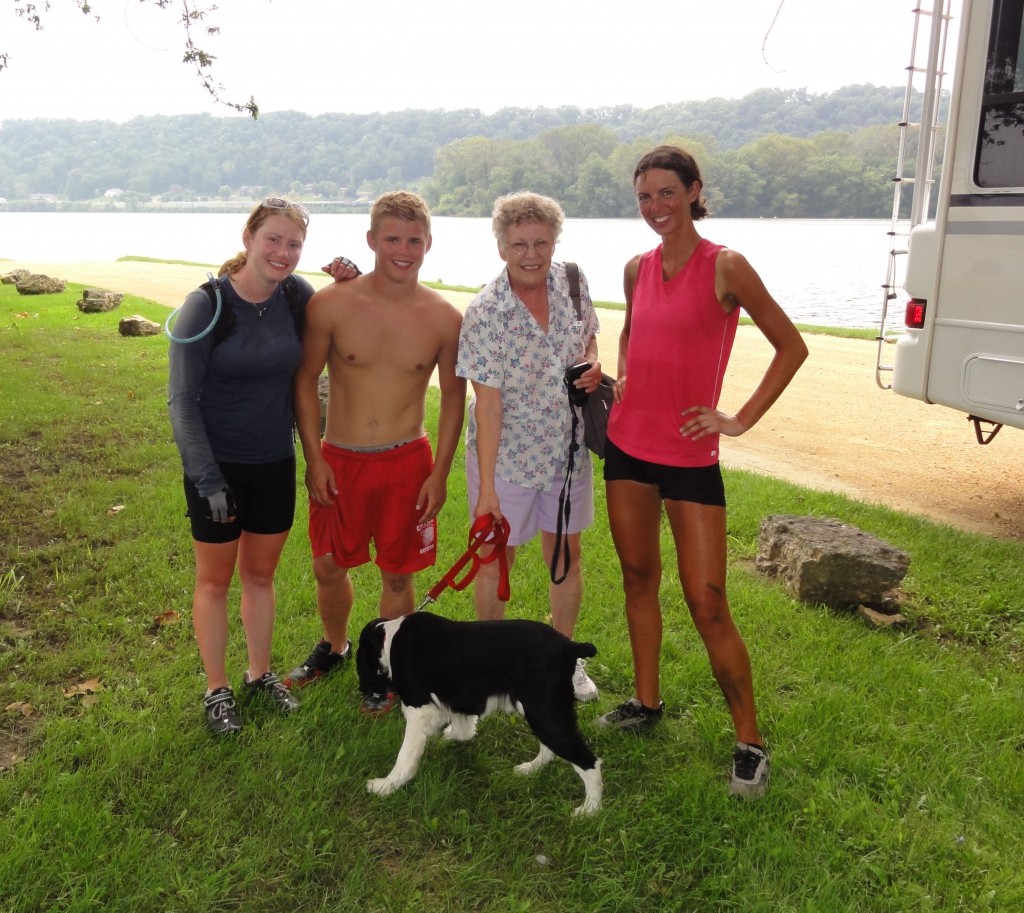 Jess, Jake, a fellow Oregonian and Me

Cycling across the Mississippi River was a treat. “The Big Muddy” I have heard so much about but never witnessed lived up to it’s name. The water was murky and thick with debris. But it wasn’t the roughly churning monster  I had imagined. The portion we crossed between Sabula, IA and Savannah, IL was wide and languid resembling a marsh in most places. I half expected to see a crocodile rise up among the lily pads. 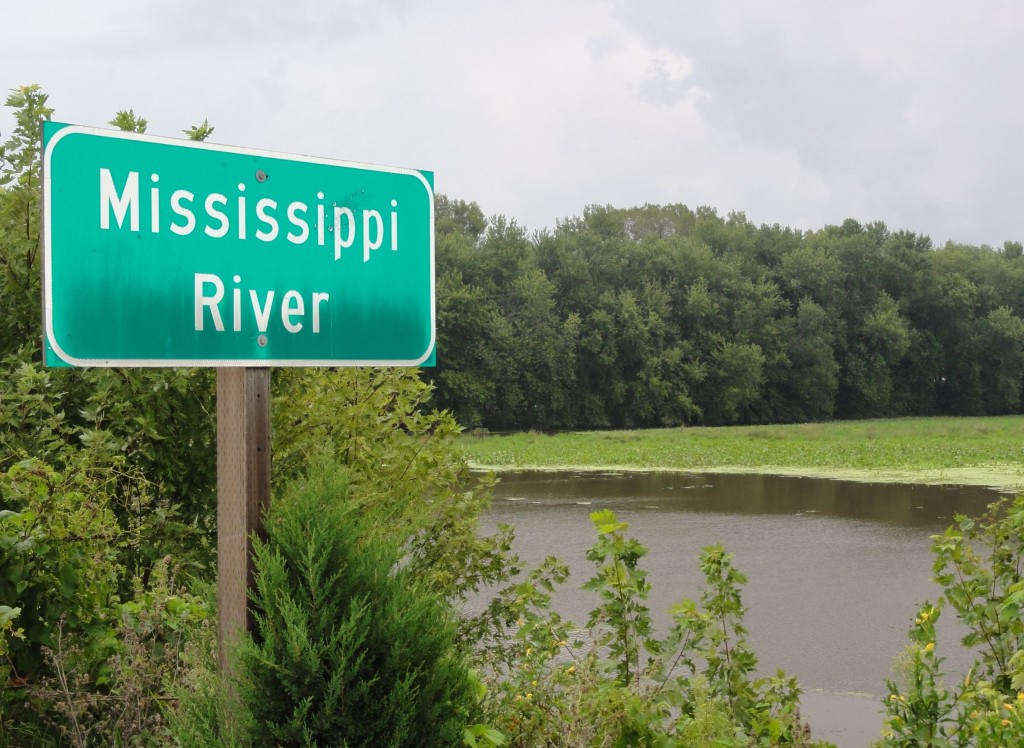 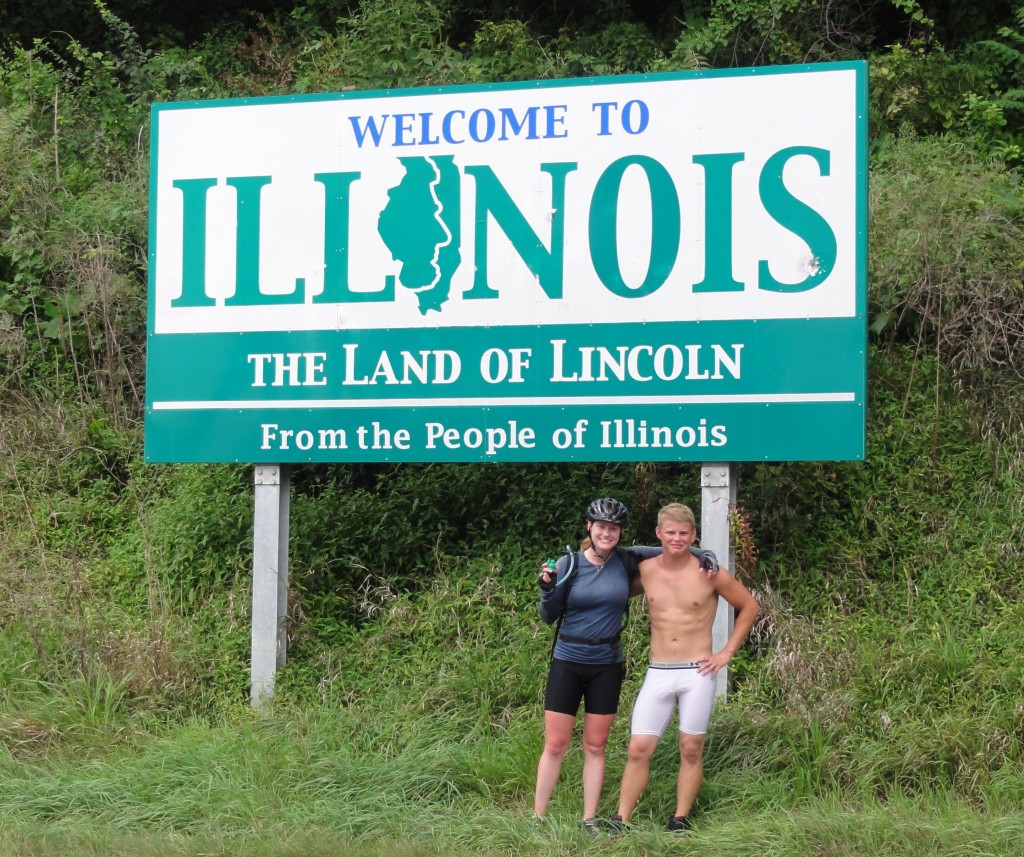 Jess and Jake in Illinois

As soon as we crossed into Illinois an entirely different feeling swept over us. The Iowan country homes were replaced by distinctly colonial white columns and brick buildings. Dense deciduous forests rose all around us and the flat roads of Iowa were replaced by slopes and rolling hills.

The three of us cycled until Mt. Carroll, IL where Jake parted ways with us. He had cycled a solid 49 miles with us (his longest distance cycled to date) and his rear end was beginning to riot. We were sad to see our company and entertainment go but we ready to take our cycling up a notch and finish the day strong.

Our plan for the evening was simple: cycle to Mt. Morris, IL to get our miles in for the day then be picked up (bikes and all) to stay with Kyle and Kathy Hombs in Dixon, IL. We fought our way through icy rain for the better part of an hour before meeting Kathy in Mt. Morris. Just as we were pulling out of a parking lot we watched as a white passenger vehicle across the street gunned it’s engine and shot off the side of an embankment with a cloud of dust in close pursuit. Jess and I leaped from the car and ran down the side of the embankment. The car was firmly implanted in the soft earth where it had been recently cleared and leveled. “Are you alright?” Jess inquired of the older man. “Call me a wrecker!” He yelled back at her request. Jess got on her phone and called 911 while I talked with the man to see if he was coherent. “Don’t make this out to be anything more than it is.” The man insisted brusquely, “I just need a wrecker.” We stayed with him despite his defensive attitude until the police arrived.

We finally arrived at the Hombs residence and recounted the tale of the bitter motorist to Jake and Kyle over a delicious meal of steak, chicken, corn on the cob, green beans and potatoes. Jess and I were both enamored by the character of the Hombs home; a 19th century farm house with many interesting rooms and passages. We retired to our quarters (complete with antique furnishings) thrilled to be sleeping in real beds. 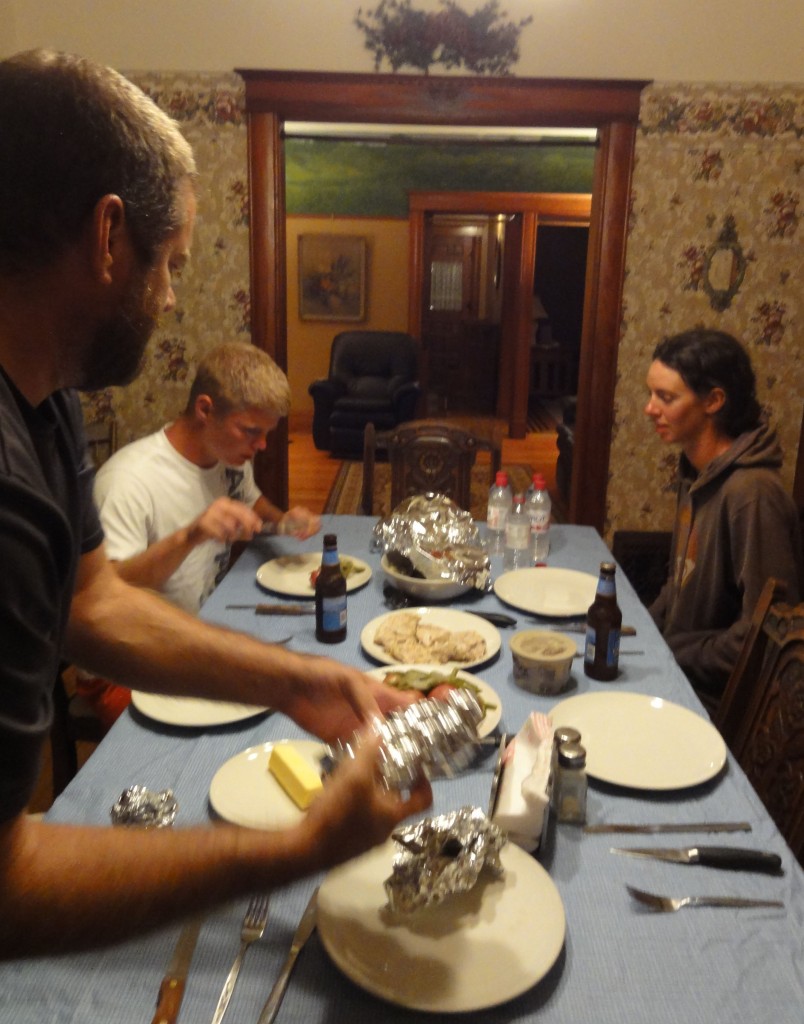 Around the table at the home of Kathy and Kyle Hombs